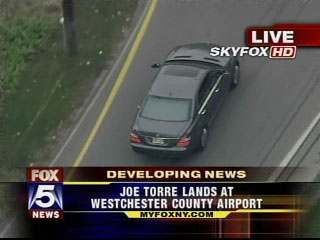 Torre! Torre! Torre!
We admit that the departure of Yankees manager Joe Torre was a big story, but there was a bit of over kill with some of the coverage. On yesterday’s 5 p.m. newscast, WCBS devoted almost twenty minutes to the story. However, that seemed tame compared to WNYW following Torre from Westchester County Airport to his home with their helicopter. It seemed surreal and we felt as if we were watching some sort of Los Angeles style police chase, but without the pursuing patrol cars. The most restrained coverage came from WNBC, who devoted less not in the sports segment time to the story than anyone else.

Still, a part of us knows if a similar situation was going on with the Mets and Willie Randolph that there wouldn’t be such a media circus. We don’t want to sound all “Marsha, Marsha, Marsha!” about it, but it does seem that the Yankees and the epic saga of Herr Steinbrenner and his minions almost always seems to attract a disproportionate share of media attention while the team from Flushing gets ignored.

Carey On
From what we have seen this week of Drew Carey in his new gig as host of The Price Is Right, we are pretty sure that the show is in good hands. The show got a bit of a freshening up, with new recordings of the iconic music and some set changes that keep with the whole retro 1970s vibe of the show. In the first show that aired, Carey seemed a bit nervous, but remember he is stepping in to shoes worn for 35 years by Bob Barker. Interestingly, Carey looks like a plumper version of the host of the 1950s version of the show, Bill Cullen, and his sort of retro persona fits in well with the show. As for how TPIR will fare in the post Barker era, only time will tell.

Star Wars: The Television Series
Star Wars mogul George Lucas has announced that he has started work on a television series based on Star Wars. Lucas told the Los Angeles Times, "It has nothing to do with Luke Skywalker or Darth Vader or any of those people. It's completely different. But it's a good idea, and it's going to be a lot of fun to do." At this stage, there is no network, but given the built in fan base any network that snags it could count on to at least sample it.