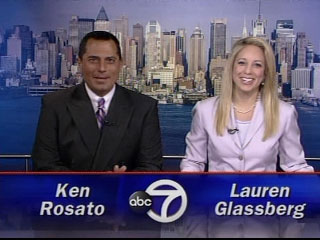 New Anchor, Same Old Tardiness
There must be something about the morning shift at WABC. After just four days on the job as the permanent replacement for Steve Bartelstein, Ken Rosato, overslept and was late for the 5 a.m. edition of Eyewitness News. We think it is pretty safe to assume that he just overslept, since he probably hasn’t adjusted his body clock fully to the new hours, and that he wasn’t spending the night out clubbing like his predecessor. We wonder if he brought bagels to smooth things over.

On Guard(ian)
Monday is the launch date for Fox 5’s new weather system called “Sky Guardian”, which is a new kind of radar. The radar, which according to what Nick Gregory tells the Daily News, "It can tell us what's happening within a 350-mile range, well in advance of anything coming our way. And it does it in real time."
At least they chose a decent name for it, better than the short lived Doppler 2 Million at WCBS, although not as good as WTNH in New Haven’s SupercalifragilisticexpialiDoppler! OK, that was an April Fools joke, but it just shows how absurd these things can be named.

Confident in Katie
Despite speculation that Katie Couric was on her way out, CBS News president Sean McManus told the AP, "All of us, including Katie, expect her to be anchoring the evening news in her fifth year."

We think that when the newscast was anchored by interim anchor Bob Schieffer it was actually the best it had been that we can ever remember for CBS. If we were running things at CBS we would probably bring Bob back, have him anchor from Washington where he is more comfortable, and move Katie to the Early Show which is supposedly retooling in January.

Bingo!
ABC is bringing back the insipid National Bingo Night, not because of the show’s awful ratings or because it was panned by the critics. The reason reflects the shift towards new media – the show was responsible for doubling the amount of unique hits to the ABC website, reaching a number higher than people who actually watched the show on television. A week of new shows is expected to be foisted upon the airwaves on December 17th.

Fox to Challenge CNBC and Bloomberg
The Fox Business Network has sent a launch date for October 15 after getting carriage agreements from the major American cable operators. If News Corp’s deal to take over Dow Jones and its flagship newspaper The Wall Street Journal goes through, we could expect some content integration, and a blow for CNBC who is The Wall Street Journal’s current TV partner. CNBC is reported to be in talks with The Financial Times in case the News Corp deal goes through.

As for how successful the new network will be, that is anyone’s guess, since Bloomberg and CNBC are the two big players and have worldwide operations catering to different markets.

Court TV Gets the Death Penalty
The first of the year will be the execution date for Court TV. The channel itself is not being killed, but the name will be. The network, which has been gradually moving away from court and law enforcement coverage, will be known as TruTV.

NBC Consolidates
NBC-Universal is forming a new unit called Peacock Productions, which will basically be the umbrella under which the company’s long form non-fiction programming will be branded under. So “Dateline NBC”, which has been more of a reality show than news magazine lately, will be put in the same stable as shows like "Dog the Bounty Hunter", "Secret Life of Vampires", "Sexiest Moments in Film", and "iVillage Live", as the new division will be producing programming for both the mother network and various cable channels, not all of them owned by NBC-Universal.

Quick Flips
In memory of Lady Bird Johnson who died earlier this week, WLIW will be airing a special Lady Bird, Naturally Sunday at 1:00 p.m. The show highlights her dedication to the environment through out here life.