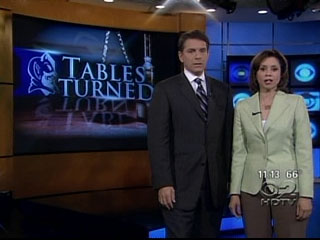 This week, veteran anchors Jim Rosenfield and Dana Tyler, who were anchoring at 6 p.m. and 11 p.m., switched newscasts with Chris Wragge and Kristine Johnson, who were anchoring the noon and 5 p.m. We think that moving younger talent to the higher profile 11 p.m. newscast is probably an attempt to get some younger viewers.

Channel 2 has been the least stable of the local newscasts over the past ten or so years making dozens of tweaks and changes. Plus, the past year has seen veterans like Roz Abrams and Audrey Puente forced out in favor of younger talent. So the move really shouldn't be that much of a surprise.

Eye of the Storm
Saturday night at 7:00 p.m. WCBS will be having a weather special, “Eye on the Storm: The Hurricane Threat” featuring all of the WCBS weather team and some experts from The Weather Channel. The show was produced in cooperation with the cable network, and will highlight some past storms that reeked havoc on the tri-state area.

WPIX Names Weekend Weather Anchor
Ending the speculation that Linda Church would move from her CW 11 Morning News spot to take over weekend weather duties, the station announced they have tapped Chris Knowles formerly of the Fox News Channel for the weekend gig.

Interestingly, Knowles started with Fox as a writer and producer for the Fox Report with Shepard Smith and then became a weather presenter. He has a B.S. in Broadcast Journalism from Syracuse University, but apparently no meteorological degree or certification from the American Meteorological Society or National Weather Association.

Joe Cioffi is Back, Sometimes
The weekend after leaving WPIX, meteorologist Joe Cioffi reappeared the next weekend on WNBC. Joe is just freelancing and will be filling in on WNBC on an as needed basis. Unlike his replacement at WPIX, Cioffi is a meteorologist and a American Meteorological Society Television Seal holder.