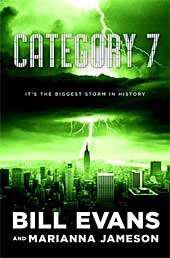 Category 7 for ABC 7’s Bill Evans
WABC’s Bill Evans is the latest local news talent to author a disaster novel about the city with his book “Category 7”, which he co-authored with Marianna Jameson. The book is the story about a man made hurricane heading towards New York. The book shouldn’t be confused with the 2005 made for TV movie Category 7: The End of the World, which was also about a deadly storm. Evans will be doing a book signing Tuesday at 1 p.m. at the Lincoln Center Barnes and Noble, just a couple blocks away from WABC.

He joins WNBC’s Chuck Scarborough, who in 1991 published Aftershock, about an earthquake hitting New York. Ironically, it was turned in to a made for TV movie for CBS in 1999 called Aftershock: Earthquake in New York.

Brotherly Love for Bolaris?
After being tipped of by FTVLive.com, a Philadelphia newspaper is reporting that WCBS meteorologist John Bolaris, who didn’t renew his contract with the station, may be headed to Philadelphia and claims that he has made inquiries with the CBS, NBC, and Fox owned and operated stations there. It is said that one of the reasons he is looking for a new position there is he wants to be in a market close to his daughter and her mother, WPIX anchor Tiffany McElroy.

Bolaris came to WCBS from the WCAU, the NBC o&o there, so he is no stranger to that market. One Philadelphia blogger notes, “Bolaris was last seen in the Philadelphia news when, in 2001, he famously predicted 70 inches of snow or something and we only got a half inch.” We have also heard stories that during his time there he was very active on the club circuit, was a bit of a ladies man, and apparently was a very good tipper.

Money Honey
CNBC’s Maria Bartiromo has trademarked the name Money Honey. According to Rush & Molloy in the Daily News, she will be having her own show of the same name produced by her production company.

Clearing the Air
A bit of clarification from last time around when we were talking about the anchor changes at WCBS. We just want to make clear that Chris Wragge and Kristine Johnson are still anchoring the 5 p.m. newscast in addition to their new duties at 11 p.m. and Jim Rosenfield and Dana Tyler are still anchoring at 6 p.m. as well as the noon shift.