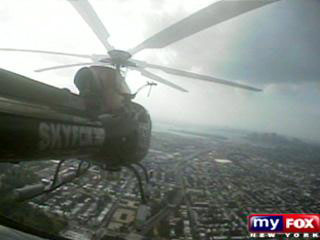 Stormy Weather
As we were away from televisions most of Wednesday, we can’t give a blow by blow account of the storm coverage. However, we can give you a brief summary of some of the major things.

CBS’ “The Early Show" faced a deluge in their Fifth Avenue studios, forcing them to retreat to the CBS Broadcast Center across town on 57th Street only forty minutes before the broadcast. After a frantic scramble, the morning show wound up broadcasting from the CBS Evening News studios with only some minor technical hiccups and perhaps the first ever fashion show from the evening news set.

Fox 5’s helicopter had to make an emergency landing in a Red Hook park during the afternoon due to a loose engine cover which could have interfered with the rotor blades. Nobody was hurt, but in light of the tragedy last month in Phoenix involving two news helicopters, pilot Roland Rinnerburger made the right call landing.

As almost expected with any sort of disaster, NBC Nightly News broadcast from the storm ravaged bit of Bay Ridge.

Finally, a clueless poster from the Jersey shore on a television message board complained that, “I just came in from the beach and put on Channel 7 to watch some Millionaire while I eat lunch. Instead Channel 7 is yapping away about some storms in Brooklyn. I'm 80+ miles away and don't care what's going on up there. It's been a beautiful, sunny day here.” We guess they don’t understand that New York television stations report on what happens in New York, especially if it is reeking havoc with the city.

We guess that the arrogant attitude of Bonds coupled with the swirl of allegations including using steroids had something to do with the apathy towards this tainted record.

A Giant Shift for WNBC
On the three nights (August 11, 25, and 30) that WNBC will be showing pre-season Giants football games, they will be moving the regularly scheduled NBC line up to their digital channel WNBC 4.4, available on cable and to over the air those with digital television receivers. In the past they would show these on the main channel on a delay, either late at night or on the weekend.

Fox 5’s Reid Lamberty moves from weekends to mornings joining Lynda Lopez on the 5 to 6 a.m. hour of Good Day New York and the 11 a.m. newscast along with reporting duties for the morning show.