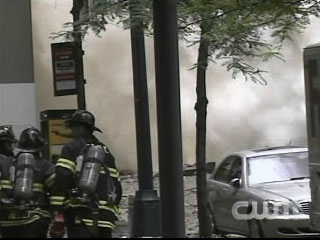 Wednesday’s steam pipe burst had a bit of overkill on the coverage, especially with WABC’s decision to pre-empt ABC’s World News (they did go to it briefly during the 7:00 hour). By 6:30, when WCBS and WNBC prudently went to their respective network’s newscasts to give viewers a chance to catch up on the national and international news, the important points of the story were covered – a. it was not a terrorist attack; b. the rest of the commute was going to be a mess. They both returned between 6:45 and 7:00 and stayed with it until around 9:00 as did WABC.

Just being on live when there is nothing really new and the saying same things over and over is just too much. That said, WPIX stood out with some amazing coverage with Arthur Chi'en on the ground, aided by having their studios just a couple blocks away from the scene, but they also really weren’t losing any other programs that provided a service to viewers like a network newscast. Some would even argue that pre-empting re-runs of sitcoms is actually a public service, especially if one of those sitcoms is “According to Jim”.

In situations like this where something happened and all the salient points are known you really don’t need to go on and on, Sure it looks good in the promos that the station covers and covers breaking news, but why not just break in when events warrant instead of going wall to wall?

Emmy Nods
It isn’t a shock that HBO leads the pack with the number of prime time Emmy nominations with a whopping 86 this year, sixteen more than ABC and seventeen more than NBC. The regular series with the most nominations is again not a surprise, since it is "The Sopranos" with 15 nominations. ABC’s "Ugly Betty" has 11; Grey’s Anatomy and NBC’s 30 Rock both have 10. The complete list on nominees along with oodles of Emmy statistics is on the Emmys website. We are going to have to wait until September 16th to see who wins when the awards will be broadcast on Fox.

Writers vs. Producers
The Writers Guild of America and the Alliance of Motion Picture and Television Producers appear to be far apart in contract talks in Los Angeles. The sticking point is the pay structure for works distributed over the Internet. Talks between the union and the producers group are expected to pick up next week.

New News Director of WWOR
WNYW’s assistant news director Jim Driscoll is moving to sister station WWOR to be their new news director. WNYW and WWOR are a duopoly and share a lot of back office staff and management, including Vice President and General Manager Lew Leone. Both stations maintain separate newsrooms.

Cutting Back on Junk Food
Several purveyors of junk food - Cadbury Adams, Campbell Soup, Coca Cola, General Mills, Hershey’s, Kellogg’s, Kraft., Mars, McDonalds, Peps and Unilever – have all voluntarily agreed to not advertise their unhealthy food products on programs targeted to specifically children. Like most self policing measures, it was done to avoid congressional involvement and it ignores other programs that are not specifically targeted towards children, but capture a large portion of that demographic – think “American Idol”.

WNET and WLIW Want You
Our two local PBS stations WNET and WLIW are calling for submissions for a local companion piece to the Ken Burns World War II documentary mini-series “The War”. People are asked to submit video interviews they conduct with people they know who lived through the war either in the military or on the home front. Selected videos will air in a program called “War Stories” to air in the fall. Those that don’t make it in will wind up on the website, which has some video interviews up now as well as submission information.