More Rescue Me for Next Season 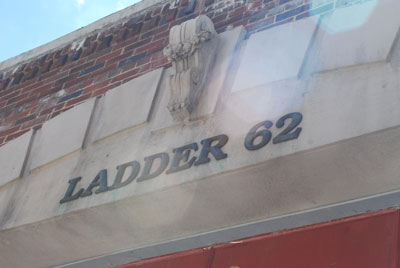 Cable network FX has picked up the Denis Leary FDNY dramedy Rescue Me for a fifth season. The show which films in the city and all over the tri-state area will not be getting the standard cable 13 episode season as it has for the past four seasons, but instead will be getting a 22 episode run split into two runs.

Bolaris is Officially Heading South
After months of speculation, it has finally been officially announced that WCBS meteorologist John Bolaris will be leaving town and heading to Philadelphia. the city where he infamously predicted a blizzard that never happened and was run out of town for it.

Bolaris, whose contract was not renewed at channel 2, will be starting at the Fox owned station in Philadelphia as chief meteorologist and will be on the station’s two evening newscasts starting in January. The move will allow him to be close to his daughter and her mother, WPIX CW 11 Morning News anchor Tiffany McElroy.

Writers Guild Set Strike
The Writers Guild of America will probably go on strike after having a unanimous vote to authorize a labor action after protracted negotiations with the Alliance of Motion Picture & Television Producers to try to negotiate a new contract before it expired earlier this week. The main sticking point is over compensation for the DVD sales and new media. The earliest expected strike date would be Monday and the Los Angeles Times reports today that members would be informed of strike plans via e-mail this afternoon.

Bob Woodruff’s Wife Hired by ABC News
The wife of injured ABC anchor and reporter Bob Woodruff has been hired as a contributor to the network’s morning show Good Morning America.

Congrats!
ABC News Correspondent Juju Chang and her husband WNET’s president Neal Shapiro had another addition to their family with the birth of their third son, Mason Blake Shapiro yesterday morning. 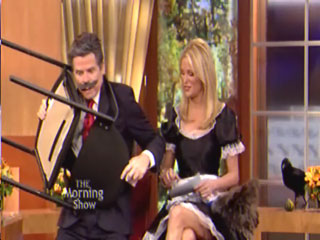 There was a funny homage to one of the funniest incidents on daytime TV on the Halloween edition of The Morning Show with Mike and Juliet. Mike Jerrick appeared in costume as Geraldo Rivera made fun of the 1988 incident when Rivera had his nose broken by a chair wielding skinhead on his eponymous talk show.

And Speaking of Geraldo. . .
Forbes has an interview with Al Primo, who was the originator of Eyewitness News and the guy who hired Geraldo Rivera at WABC. In the interview which hits on his current project Teen Kids News also brings up the early days of the newscast. As for Geraldo, he apparently was always getting in trouble: he told Primo after one of the reporter's clashes with station management, 'You suspend me, and tomorrow morning there'll be 10,000 Puerto Ricans out there on the street lying on their backs stopping traffic and chanting, 'Free Geraldo! Free Geraldo!'" Rivera did back down and finally accepted the suspension.

Noteworthy Television This Weekend
Some noteworthy things to watch this weekend:
Diamond at the Rock: 75 Years at Radio City Music Hall (Saturday, 7:00 p.m., WNBC 4; Sunday, 9:00 p.m. MSG) Given that this documentary on Radio City Music hall is being produced by MSG, the parent company of the venue, we can guess that it will be positive and overlook any controversy, but it may turn out to be interesting.

Wheel of Fortune 25th Anniversary: A New York Spin (Saturday, 7:30p.m., WABC 7) Earlier in the fall, Pat Sajak and Vanna White taped three weeks of shows in the Big Apple to celebrate its 25 years of wheel spinning. This behind-the-scenes look at the game show during its visit includes a look at Vanna's "New York-style wardrobe" (power suits?) and is hosted by Eyewitness News meteorologist Bill Evans.

New York City Marathon (Sunday, 9:00 a.m., WNBC 4) WNBC has the live coverage of the marathon this year and will be airing coverage from 9 a.m. until 2 p.m. with NBC’s highlight show airing at 3 p.m. A bit of schedule shuffling will occur, so if you want to watch former Law & Order star Fred Thompson on Meet the Press, tune in at 8 a.m. or catch it on MSNBC at 6 p.m.

Design Week 2007 (Sunday, 1:00 p.m., WCBS 2) An hour long special focusing on House and Garden’s Design Week 2007 with interviews with some top designers, a look green design, and some back stage peeks at designs for film and Broadway.