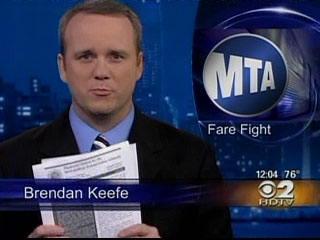 Why Brendan Keefe Left WCBS
Last week we mentioned that Brendan Keefe, late of WCBS, is now and anchor at the ABC affiliate in Cincinnati, WCPO. He started this week and he revealed to the Cincinnati Post some of his reasons for leaving New York for Ohio. He told the paper, "We wanted a place to raise a family that we could call home for a long time."

NBC Moves, Conan to Go West
When Conan O'Brien takes over The Tonight Show in 2009, it won’t be from 30 Rock. It also won’t be from the show’s current home Burbank either.

NBC announced earlier this week that The Tonight Show will be staying in California and they will be abandoning their fabled Burbank west coast home in favor of a new network facility across the street from Universal Studios. That means no “beautiful downtown Burbank” jokes for Conan.

Closer to home, NBC News and MSNBC will be moving into a new "world headquarters" with newly-renovated studios and a new newsroom for the two networks on October 22nd in NBC's 30 Rockefeller Center building.

GE Thinking About Selling NBC While NBC Buys Cable Network
The Financial Times reported this week that General Electric, parent company of NBC Universal, is thinking about selling it off. The decision about the fate of the division, worth about $40 billion, will be made after next year’s Olympics.

Interestingly, the news of the possible divestiture of NBC Universal came during the same week they announced they were buying Oxygen Media, owner of the woman focused Oxygen cable network, for $925 million. We find the timing a bit odd, given the company’s recent cuts in other parts of its operations, most notably local television news as part of its NBC 2.0 scheme.

Fox Business Network Debuts Monday
Fox’s entry into business news channel arena begins on Monday with the Fox Business Network. Time Warner is will add the network to channel 43 in Manhattan, Queens, Staten Island, and parts of Brooklyn. It also looks (according to the network's website) like Cablevision, which serves the Bronx and parts of Brooklyn, will carry the channel, although we weren’t able to find where it will appear on the line up.

We wonder how they will do against established competitors CNBC and Bloomberg. Although, if Newscorp's deal to buy Dow Jones goes through it may change the playing field a bit.

Bolaris Heading South
Two Philadelphia newspapers are reporting that WCBS meteorologist John Bolaris will be making the trip down I-95 back to the city where he had his last gig. Word is that he was run out of town there after predicting a blizzard that never happened, although we think that that may be a bit of an urban legend.

Bolaris, who underwent hernia surgery at Columbia Presbyterian Hospital yesterday, is said to be heading to the Fox owned station there, WTXF. The two papers indicate the announcement is fairly imminent, but they may be sharing the same source as they appear to be co-owned.

You may recall that part of Bolaris' choice of markets was dictated by wanting to be close to his daughter and her mother, WPIX CW 11 Morning News anchor Tiffany McElroy.