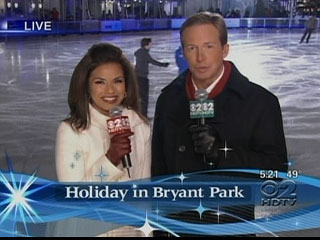 Terrible 2 No More
If you were to compare WCBS today with WCBS a year ago, you would definitely notice that something has changed. Sure, the graphics and music have changed, but that isn’t really it: What happened is that the station has finally gotten a clearer focus - not just because the station went HD. It's in the quality of the product they put on air and what CBS has been covering. It was almost if the station’s newscast was an amorphous blob which, one day, finally gelled properly.

The station’s newscasts wound up finishing the November sweeps second (behind perennial first place finisher WABC) in the key adults 25-54 demographic for the first time in about twenty years, and finishing second overall in the 11 p.m. news race. We don’t know if it's the strong CBS and syndicated lead-ins (like Judge Judy) or people are starting to notice the station is doing something right. We think the station is doing something right, and since their website has gotten a 200% increase so far this year compared to all of last year, it may mean people are looking at the station for news both on air and online.

Now, we also have to admit that Chris Wragge has developed into a pretty good news anchor and he seems really great on air with Kristine Johnson. Someone from out of town even asked us, “When did Chris Wragge become a good anchor?” The answer to that is in the past year. It really is kind of amazing how he has evolved since he was brought as a sports anchor after the station ignobly booted Warner Wolf back in 2004.

4 Falls
One of the more interesting things with the November ratings is how WNBC has slipped over the past year. Part of it no doubt had to do with the NBC-Universal budget cuts which affected the station’s personnel and the quality of the NBC lead ins, but some of it also has to do with the elimination of the 5 p.m. newscast.

However the slippage of New York institutions Chuck Scarborough and Sue Simmons at 11 p.m. is the most shocking slip. Last year Chuck and Sue were in a virtual tie with WABC’s Eyewitness News with a 5.8 rating /11share. This year they slipped down to third place with 4.4 rating /8 share.

Staten Island Finally Gets a Walk Around
David Hartman and historian Barry Lewis have been walking around the city and parts of New Jersey for the past few years with their amazing “Walk Around” specials on channel thirteen. Finally, Staten Island will be getting their unique mix of the contemporary and the historic about the city’s least populated and often neglected borough with A Walk Around Staten Island which will air on WNET at 9:30 p.m. on Monday. If you want to watch the hour long show now, it is online as part of the show’s companion web site.

We have seen the show and learned a lot about the borough that may or may not have been won in a boat race with New Jersey. We may even take our own walk around Staten Island when the weather warms up.

Quick Flips
Hannah Storm, one of the CBS Early Show’s anchors, will be leaving the eye network’s morning show to pursue other projects at CBS News according to TV Newser.

Emeril Lagasse’s Food Network show Emeril Live! has been canned, but his other show for the cable network, Essence Of Emeril, will continue.

It looks like the new Knight Rider in the pending NBC revival of the 1980s children’s program will be a Ford Shelby GT Mustang instead of the iconic Pontiac Trans Am according to car blog Jalopnik's tipster who provided pictures of the modified Ford.

Aimee Nuzzo will not be returning to WNBC from maternity leave. Instead of returning to TV, she'll be working with her husband on a new content production company, Snapfocus Productions.

The striking writers of The Late Show with David Letterman have a humorous blog complete with videos, so you can get your dose of late night comedy writing on line.

Noteworthy Television This Weekend:
Reliving The Glory Days-New York City Baseball 1947-1957 (Saturday, 10:30 p.m., WPIX 11) This half hour special hosted by CW11 News at Ten sports anchor Sal Marchiano will not only take a look at the baseball focused exhibit at the Museum of the City of New York - The Glory Days: New York Baseball 1947-1957, but the ballparks of New York that are no more and the breaking of baseball’s color barrier – something that happened in Brooklyn.

The Graham Norton Show (Saturday, 10:00 p.m., BBC America) It is a Dukes of Hazzard reunion British style on this week’s show. Sounds like a lot of wackiness will ensue on this British talk show.