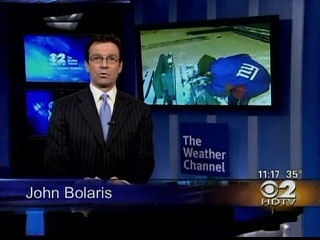 No More Bolaris in the Forecast
You won’t be seeing John Bolaris anymore on WCBS. He was last seen this past weekend and his bio has been taken down from the CBS 2 website. He will be starting at Fox owned WTXF in Philadelphia next month. We should mention that before the Long Island native was basically run out of town on a rail down there after predicting a blizzard that never happened, although he did get a fond farewell unlike here.

Penny Pinching Peacock
Despite NBC Nightly News With Brian Williams winning the November network newscast ratings race, NBC-Universal is engaged in yet more ways to save some money including some cuts at NBC News. The cuts which are expected to be imminent , will be happening to non-on air NBC News and MSNBC employees involved in operations and news gathering and according to the Post is expected to save $20 and 40 million dollars. You may remember that last year that about 750 jobs were cut on the network level as well as many on the local level such as Joe Avellar, Dr. Max Gomez and Jane Hanson who were let go from WNBC.

NBC will also be outsourcing 30 hours of programming (3 ten episode series) to Thom Beers’ Original Productions which has been responsible for cable documentaries like the Discovery Channel’s The Deadliest Catch. The move, supposedly not a reaction to the ongoing WGA strike, will cost NBC considerably less than the same amount of scripted or reality shows. Given the negative results on ratings on both the national and local level, it seems like NBC is doing things to lose money in trying to save some.

Quick Flips
Carl Bernstein, half of the famous Woodward and Bernstein that brought to light Watergate, will be joining CNN as part of its 2008 election coverage.

ABC’s Nightline beat out forced-into-reruns- because-of-the -WGA-strike The Late Show with David Letterman and The Tonight Show with Jay Leno. It was the first time a ratings win has happened for the ABC News show in the post-Ted Koppel era.

Maggie Rodriguez, co-anchor of the Saturday Early Show, will be taking over Hanna Storm’s co-anchor duties on the CBS Early Show starting January 7.