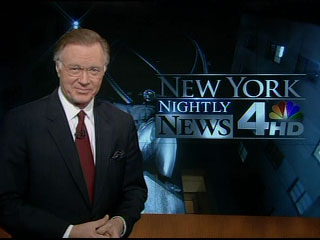 WNBC has been touting New York Nightly News as a newscast that is on when you are at home to watch. This is true, but it isn’t like any other local newscast, instead it is more like its namesake NBC Nightly News, which has fewer and longer stories. We do like the concept of a harder and less fluffy newscast and it is a marked improvement over the previous occupant, Extra, although a half hour of color bars and tone would be and improvement over Extra.

Still it is not the comprehensive newscast, like you would find at 6 or 11 p.m., they seemed to be promoting. Despite that, it is a refreshing change to see a newscast that isn’t focusing on fires, car crashes, shootings, and other assorted mayhem. Chuck Scarborough, of course, is Chuck Scarborough, so his presence in the anchor chair does lend the newscast some instant credibility.

Still we really can’t give full marks just yet, since it is the first week and there will undoubtedly be tweaks, but we can say they are off to a pretty good start. But will it be enough to get the station’s late afternoon/early evening ratings up?

Now even before the insipid infotainment show Extra was in the 5 p.m. time slot, the weak link for WNBC has been in News 4 You at 5:30. The show has improved, but it still seems not to have gelled that well. Still it is better than other NBC owned station’s attempts at fluffier or features heavy newscasts - the mercifully canceled Barely Today in Chicago and the overly long All That and More in Philadelphia. We really think there needs to be a bit more schedule tweaking if things don’t pan out.

Of course, it didn’t take long for another station to make a point of WNBC’s decision to end 5 p.m. news. Fox 5 has been running promos slamming WNBC, albeit not by name, and mentioning their own is the fastest growing 5 p.m. newscast. Time will tell if the move will work and part of us hopes that this will help kill Extra, since we need fewer of these syndicated celebrity based infotainment shows

Iraq No Draw for Katie
Last week’s much touted visit to Iraq by Katie Couric and the CBS Evening News didn’t bring any sort of ratings boost. The newscast finished a distant third for the week with only 5.46 million viewers, compared to 7.78 million for NBC and 7.81 million for ABC.

Fox Business Anchored
Ahead of its launch next month the Fox Business Network is starting to name staff. Tapped from Fox News Channel are David Asman, Cheryl Casone, Rebecca Gomez, Dagen McDowell and Stuart Varney. They will all be pulling double duty working for both Fox networks.

#bars
#celebrity
#chicago
#Chuck
#chuck scarborough
#fox
#nbc
#nbc nightly news
#new york
#New York Nightly News
#news
#philadelphia
#running
#television
#tv
#wnbc
Do you know the scoop? Comment below or Send us a Tip
A new Gothamist is coming! We’ve moved comments over to our beta site. Click here to join the conversation and get a preview of our new website.