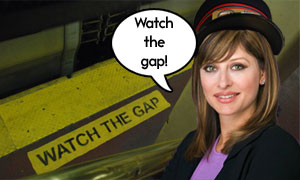 CNBC's Money Honey Money Honey Says Mind the Gap
Earlier this week, while in Grand Central Terminal we heard a familiar voice reminding us to “Mind the gap.” It turns out it was CNBC “Money Honey” Maria Bartiromo. Apparently Metro-North riders aren’t the only ones who are being reminded, as the Post reports that Long Island Rail Road commuters are getting similar reminders. The recorded messages were the brainchild of MTA board member Mitchell Palli. So apparently MTA board members do other things than raising fares, albeit of questionable benefit.

WGA Strike: A Separate Pact
The Writers Guild may have stalled in talks with the big studios, but they are negotiating with some small independent film and television production companies. Some deals may be announced next week and, as we mentioned earlier this week, one of the possible deals could be made with David Letterman’s Worldwide Pants to get the two late night shows it produces for CBS back on air. The WGA released this statement earlier today: "Representatives from Worldwide Pants and the Writers Guild of America, West and the Writers Guild of America, East met today. A lively exchange of information took place. The WGAW and WGAE will not comment further."

NBC’s Jay Leno and Conan O’Brien will be back with new shows next month along with The Daily Show With Jon Stewart and The Colbert Report will be back on Comedy Central and ABC’s Jimmy Kimmel Live - all sans writers and on the other side of the picket line. NBC’s Carson Daly began new writer less episodes a few weeks ago.

The strike is also causing the People's Choice Awards, scheduled to air on CBS next month, to be produced in a pre-taped magazine show format.

Dupont-Columbia Winners Announced
The Dupont-Columbia Awards, the Pulitzers of broadcast journalism, were announced this week and no local TV or radio stations have snagged one. The award ceremony will be next month and PBS will broadcast a special airing here on January 29 on WNET at 9 p.m. The complete list of winners can be found here.

News 4 WNBC at 5
WNBC is doing some more late afternoon shuffling. Starting January 2, there will be a 5 p.m. newscast, but there is some bad news, it will still be a half hour and infotainment show Extra will be in the 5:30 slot. WNBC's 5 o'clock hour has suffered in the ratings since the demise of Live at Five while rival WCBS has made gains in the time slot.