Television Watching: Has WABC Gotten Worse
and Some Other TV Tidbits 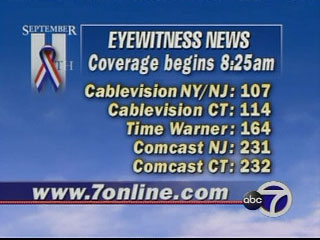 Has WABC Changed for the Worse? We are starting to think that Bill Beutel, Roger Grimsby, or Tom Snyder would not recognize their former station if they came back to life. Sure the station is dominant in the ratings but has the quality of the news product gone down?

We think it has, especially given the recent and thankfully reversed (albeit after much public outcry and pressure) decision to relegate the bulk of the 9/11 memorial coverage to its digital subchannel and show the very profitable high rated morning line up of Live With Regis and Kelly, the Rachel Ray Show, and The View. And how did they announce their lack of coverage? A brief mention on Eyewitness News with the graphic above.

It really seems as if the mark of general manager Dave Davis has made for a fluffier newscast that seems peppered with kicker stories and an overall less serious tone. If you know anything about Davis’ last station, WPVI in Philadelphia, or have seen their ratings powerhouse 1970s themed “Action News” newscast which has a definite down market feel to it. In fact, it seems as if Davis has been trying to replicate that sort successful pandering station at WABC for the past few years.

When we compared WABC to WPVI, there were a lot of similarities in their newscasts and overall station branding which seem to have both a throwback and blue collar quality to them. True, WABC’s Eyewitness News doesn’t have a lead anchorman who is more like Ron Burgundy than Bill Beutel, music that went out of date during the Nixon administration, or a set that looks like it was designed by a mob wife trying to put on airs, but the pacing, presentation, and content of the two stations newscasts is remarkably similar. Given the presence of Davis at both stations, it seems far from coincidental.

If we compare WABC with sister station WLS in Chicago, WABC looks like a station from some small market in Iowa who appears to not had the money to update their graphics or set since the mid 1990s. When it comes to ABC owned stations, Chicago’s ABC 7 makes New York seem like the second city. WLS has modern graphics, a modern studio (which they don’t have to share with another show), and an overall harder news focus which has kept them in first place in the ratings since the mid 1980s. Watching them would make you think they were the network’s flagship station instead of WABC.

So how do things compare historically? We plopped the old VCR in a tape of a WABC newscast from 2003, just a few months before Davis joined the station, and it seemed totally different. The graphics were much smaller and better looking than those of today and the newscast seemed to be less kinetic, harder edged, and more focused than the current product. It was almost as if it was a different station with a totally different vibe. We did the same for WNBC and there wasn’t the overwhelming sense of sea change that we felt with channel 7.

Still, we guess the station really doesn't have to worry about what is in the newscast as long as they are getting the ratings. Although, that sort of thinking could lead to the idea of ditching a major news event in favor of highly rated chat shows making a great deal of sense. Either that or someone had a few too many Grimsby sized drinks.

Doing Digital Right
After WABC got shamed and pressured into reversing the move of 9/11 Memorial coverage to a digital subchannel in favor of morning chat shows (irate callers overwhelming your switchboard tends to do that to stations), WNBC's plan to shunt the Today Show off to their digital subchannel WNBC 4.4 in favor of 9/11 coverage on the main station seemed like the perfect counterpoint. NBC 4 has recently started doing this when local programming, like Giants pre-season games, has conflicted with network programs. The only down side to this is those who don't have cable or a digital television receiver can't watch the pre-empted network shows, but it does give the majority of viewers a choice.

BBC to Take on American News
On October 1 at 7:00 p.m., the BBC will launch BBC World News America on BBC America as well as the BBC’s worldwide news channel BBC World. Matt Frei, the BBC’s Washington correspondent will anchor the newscast which will focus on both American and world news.

20/20 vs. Dateline NBC
Tonight ABC’s newsmagazine 20/200
. (10:00 p.m. WABC 7) will be airing an expose on rival newsmagazine Dateline NBC and their “To Catch a Predator” reports. The investigation is headed up by Brian Ross, who should be somewhat familiar with the NBC program, since he was a reporter for it in the early 1990s.

New Fox 5 Talent
Andy Rosa Adler will be the first Entertainment/Web Reporter for WNYW’s website and she will report on air for both WNYW and WWOR. She joins the station from KPSP in Palm Springs, California where she was an entertainment reporter and anchor of the station’s daily entertainment show.

ABC News Merger
ABC News will merge the weekend and weekday staffs of its flagship “World News” newscasts. There will be no staff cuts and the merger will take place immediately.