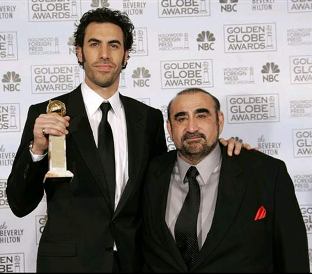 NBC News to Cover Golden Globes
To plug the giant hole in the network’s schedule this Sunday, caused by the WGA not giving a waiver to Dick Clark Productions for the Golden Globe Awards, NBC has handed the whole thing over to its news division.

First at 7 p.m., there will be a two hour Dateline NBC filled with interviews of those actors will ignore the Screen Actors Guild’s request to boycott the show (to show solidarity with the WGA). Still, the Dateline show, titled "Going for the Gold," will be hosted by Matt Lauer, have commentary from Kathy Griffin (whose reality show is on sibling network Bravo), and offer predictions from the "Football Night in America" team.

The final hour at 9 p.m. is where things get really blurry. Instead of the traditional ceremony, NBC News is going to be the exclusive live broadcast outlet for the news conference announcing the winners. An NBC spokesperson told the Los Angeles Times, "Given all the attention that has been focused on this event and related industry issues, it is clearly worthy of our coverage." What they didn’t mention is that NBC saves $6 million on the rights fees, since it isn’t an awards show anymore. There would have been an after-show hour at 10 p.m., but now there will be an American Gladiators re-run.

Oh well, it's not like there's a catastrophic war or presidential election or anything else for the news media to saturate us with.

Jeff Hermanson, assistant executive director of the Writers Guild of America West told The Washington Post, "We're well aware that NBC is attempting to evade the strike by taping interviews with celebrities under the guise of a 'news' program. We consider that 'struck' work." And there will be pickets at the 'news' conference."

John Hockenberry, the former NBC News reporter who wrote a highly critical piece in the current issue of MIT's Technology Review told the Los Angeles Times, "It's a relatively small step from MSNBC and 'Dateline' doing Golden Globes specials as if it was some kind of documentary event to covering a news conference in place of an awards show. News divisions have to justify their existence with a certain amount of sales and promotion. It's not really an erosion game anymore. I think everyone assumes it's all marketing."

Quick Flips
CBS has come to an agreement with the Writers Guild of America over employees who work for CBS News in Chicago, Los Angeles, New York and Washington D.C. who have been working without a contract since 2005. This had no relation to the current WGA strike against the entertainment industry.

A federal judge has allowed Dan Rather’s lawsuit against CBS over his firing to go ahead.