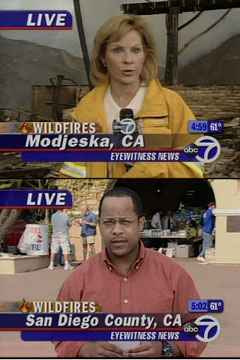 We have been harping on stations that send reporters to cover stories outside of the tri-state area for some time now questioning both the journalistic and financial soundness of it. We have no problem with the networks sending their anchors out to report at the site of major stories like this, and all three did for a few days, but sending local reporters out is a different story. It took WABC sending two reporters to cover the the California wildfires, unlike the other stations in the city who relied on their network's/station group's affiliate services, for the Daily News to notice and ask questions on the practice.

WABC's News Director Kenny Plotnik told the paper, "We believe our reporters can best tell this story for the viewers." To us it seems like one of two things (and possibly both) - the station sees this as something that can get them some promotional millage or given the networks recent belt tightening it is a way for the network to have more people on the ground, but aren't budgeted to ABC News. Plotnick also told the paper that the station would continue the practice, "Stories as huge as this, we want to be there." We should also note that WABC was not the only ABC owned station to send reporters to the Southland, so it may have been dictated from above and Plotnick may be just be doing some spinning.

It really doesn't add anything to the coverage and on a practical level, the reporters lack a lot of the local knowledge that reporters who actually cover the area on their regular beat would have and it takes the reporter off covering stories in the tri-state area. A WCBS spokesperson told the paper of the benefits of having reporters based in the area cover the story, "They know the area and the terrain, as well as the details to report on the devastation, rather than have one of our [New York] people just go out there and report from there." WNBC's Dan Forman told the News, "We've made the decision that we are going to invest our money with this [geographical] area."

CNN Using Wildfires for Show Promotion
According to the Drudge Report, CNN's president Jon Klein in notes for a Monday news meeting said, "Great job on the 8 o'clock special on Friday; great job on the fire coverage. We shouldn't irresponsibly link this to Global Warming, but it is a nature story, so we should be able to use it to push the Planet in Peril special tomorrow night." And we thought CNN was the cable news network that was supposed not to have an agenda.

No News for Maria Shriver
Current California first lady and former NBC News correspondent Maria Shriver says she won't return to television news. At an event in California, she blamed the media circus over the death of Anna Nicole Smith. We can hardly blame her, since we are still dumbfounded by the amount of coverage that was dedicated to that idiotic story.

New GM for WABC
Rebecca Campbell will be the new General Manager for channel 7, joining the station from the ABC owned station in Philadelphia, WPVI. From what we have seen of her old station, which has a newscast that seems like a bad community theatre production of Anchorman: The Legend of Ron Burgundy complete with 1970s vintage music yet somehow manages to dominate the ratings, we can only hope she won't do anything to start Bill Beutel spinning in his grave. She replaces Dave Davis who moved over to ABC News.

Viva Canceled
CBS' adaptation of the BBC's Blackpool had some thing lost in translation so Viva Laughlin has been canceled. It joins Fox's fakeality show Nashville and the CW's internet video show Online Nation on this season's list of the canceled.

Dropping Anchor?
The Post's Page Six is reporting that WCBS anchor Chris Wragge has split with Long Island native and anchor at the CBS station in Philadelphia Alycia Lane. The paper reports that Wragge was pressured by CBS 2 to split with Lane "because of her bad press."