Television Watching: <br>Mars Bars, Awards and Singing Unlike a Soprano 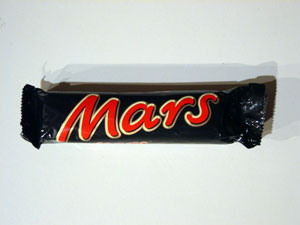 A campaign to send the CW’s Dawn Ostroff the entire American supply of the popular British candy bar in an effort to save Veronica Mars has not effected local Mars bar availability, despite claims by organizers that they “bought out all the available Mars Bars in the U.S.A.”. Visiting Meyers of Keswick in Greenwich Village earlier this week, we were able to purchase several Mars bars from a well stocked jar. We don’t know if this is because the group switched to the American Mars bar replacement the Snickers Almond. Although there doesn't seem to be any official word about Friday's decision of whether Veronica Mars will return as a mid-season replacement yet, there is talk of a feature film and doing season 4 as a comic book.

The New York Comedy Festival Switches Channels
For its fourth outing, the New York Comedy Festival has changed its broadcast partners from WABC to the Fox owned WNYW and WWOR. Special programming on the station and its website along with appearances by the stations talent at the event's various venues is expected when the festival opens in November.

Will The Sopranos Go Hollywood?
The actor who played the mysterious man in the Members Only jacket in the final few seconds before The Sopranos faded to black, Paolo Colandrea who's day job is a suburban Philadelphia pizza shop owner, told his local newspaper, “I don’t want to say anything about what happened next because they may use it someday in a film.” We don't really think that this is the case, as many popular television shows have filmed alternate endings as a way of dealing with leaked information before the show airs. Still, we won't rule anything out given the fact that a film version would probably be a profitable venture and given Broadway lately we wouldn't be shocked seeing The Sopranos: The Musical.

If for the past couple of weekends you have wondered why Craig Allen has shown up on Fox 5 doing weather, he is freelancing over the summer for the station. No doubt Lew Leone, his former boss at WCBS and now Vice President and General Manager at WNYW, had something to do with it.

Photograph of a British Mars bar by Triborough on flickr