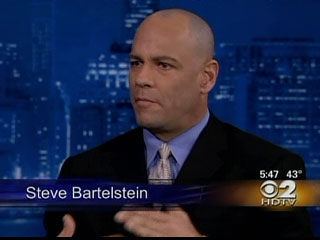 Bartelstein is Back
Steve Bartelstein will be back on anchoring starting Saturday morning on WCBS alongside Mary Calvi. It was back in September when he revealed to the Post’s Cindy Adams that CBS made overtures to him on the day he was fired from WABC - and that he had testicular cancer. He’ll also be doing some reporting for the station as his health permits.

Bartelstein made his first appearance on the station on yesterday’s 5 p.m. newscast where he talked about his bout with testicular cancer, after a segment from Dr. Max Gomez about the disease and how quick diagnosis and treatment is important. He spoke about his first day of his diagnosis, “You know, as Max said, you have to get in right away. And when they find out that you have it they don't waste anytime. I had a doctor's appointment on Friday at 2:00. 3:00 an urologist, 4:00 to a specialist and at 6:30 after doing a sonogram, they came in and said we're putting you in the hospital tonight. Have you eaten lunch? We are doing surgery tomorrow. Within 12 hours they had done the surgery.”

He also revealed the reason he shaved his hair was to “get ahead of it.” Bartelstein said, “Bobby Murcer called me and said, you stay ahead of it. With his country accent, 'Son, you stay ahead of it.'“ He added, "Robin Roberts my very good friend said she had an experience where she didn't, she says Steve, do it because when you see it fall out it's not what you want to see. So now it's gone. So I never saw it fall out.”

Strike Out
The first and most obvious casualties of the writers strike were the daily late night talk shows, live comedy programs and oddly The View (which makes us view the whole Rosie O'Donnell dustup in a different light). As the week progressed production on several filmed shows ground to a halt and several actors have joined the picket lines on both coasts. So far Fox's Back to You and Rules of Engagement, CBS' The Big Bang Theory and The New Adventures of Old Christine, ABC's Desperate Housewives and NBC's The Office have all stopped production. And Fox won't even air 24 come mid-season.

The Los Angeles Times has a handy score card of effected shows, which is a good yardstick to see when the new episodes will run out, and some very good coverage of the strike.

You can also get news and picket locations in the city from the local union, the Writers Guild of America, East.

Green GE
NBC Universal’s “Green is Universal” campaign seen on its various networks and local stations this week is a bit of a joke. On the networks side it seems to have generated some “very special episodes” of shows (with only 30 Rock really poking fun at the concept) and some cheesy “The More You Know” PSAs. However, most distressing were network news stories that seemed like ads for other divisions of the parent company General Electric – a company that ironically has a dismal environmental record doing things like contaminating the Hudson River with PCBs.

On the local side WNBC has been airing some stories (under the “Go Green at Any Age” banner) which just seemed like an environmentally themed version of the typical stuff you would find in November on any station and mercifully didn’t seem like a General Electric advertorial. The station will be airing a half hour special at 7:00 p.m. on Saturday called Go Green at Any Age, which we expect will be a collection of the weeks reporting.

MSNBC Not Rosie
The rumored Rosie O'Donnell show on MSNBC is not going to happen. O’Donnell wrote on her blog, “2day there is no deal poof my career as a pundit is over b4 it began”.

Memo to CBS
Restructure your Sunday night lineup so when football runs over viewers don’t have to attempt to figure out when something is on. A show we mentioned in Noteworthy Television This Week was Cold Case, which in theory was supposed to air at 9:00 p.m., but instead aired about a half-hour later. Take a note from Fox, which has a post game show that fills the void so programs can start on time. Sure, you may have to do a bit of lineup shifting like moving 60 Minutes to 8:00 and shifting something later in the night to another night, but this way people have some idea when things are actually airing on your network.