Back to the Newsroom Again 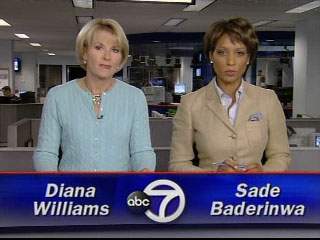 Since WABC went back to broadcasting Eyewitness News from their newsroom last Friday, there has been much speculation on various television message boards that the station had another problem with the current set or was getting a new set. You might recall that they broadcast from the newsroom after a studio fire in May and given the odd choice of moving on a Friday, it must have made some fear the worst.

In what seems to be the closest thing to an official pronouncement from the station, meteorologist Bill Evans, claims in a post on one of the station’s message boards that, “We are going to be in the newsroom this week and final repairs are made to the news set from the past fire.”

Although one poster to an independent message board claims to have gotten an e-mail from the station saying, “WABC-TV is in the process of building a re-designed news set. In order to do that, we have had to temporarily relocate the anchor desk to the newsroom. We hope to have the project completed in a week or two.” But we all know how reliable such message boards can be with people claiming to have some inside information.

We would have checked in with the station ourselves, but unlike every other station in the market, they don’t have a PR staff. So this, as they say on the Internets, is developing, but our money is on a new set.

Adieu John?
It looks like the decks are being cleared for WCBS meteorologist John Bolaris at his former station in Philadelphia, NBC owned WCAU. The recent announcement that WCAU meteorologist Doug Kammerer, who has been seen here on WNBC as a fill in, will be moving to KYW, CBS owned station there, in February. That was one of the stations that Bolaris was rumored to have talked to.

This opens up a slot there for Bolaris to move into, and given the reports that his contract at CBS 2 is up at the end of the year, it appears that the forecast model shows that he may be heading south. As we mentioned last month, Bolaris, who seems to be getting less and less air time on WCBS, was rumored to be talking with several stations down there, mainly because he wants to be in a market close to his daughter and her mother, WPIX anchor Tiffany McElroy.

If he does join WCAU, he'll have some former New York television talent to keep him company including former Fox 5 meteorologist Glenn Schwartz, and former WCBS reporter Vince DeMentri.

Duopoly Park
WWOR has a new weekend anchor for “My9 News at 10”, Christina Park, most recently of CNN Headline News. She starts behind the anchor desk in Secaucus on September 1st and will spend weekdays reporting for both channel 9 and sister station WNYW Fox 5. She’ll also be a fill-in anchor on both of the Fox owned stations.

NBC May Increase Amount of Spandex on Television
Remember the cheesy spandex filled syndicated show from the 1990s called American Gladiators? NBC is hoping you might. The network, along with MGM Television and Reveille, is reviving the show which looks like it will be a mid season replacement and will have localized franchises throughout the world. Given how absurdly cheap the original was to produce, it makes financial sense given the whole NBC Universal 2.0 scheme of producing cheaper programming with a focus on “unscripted” shows. No word on if the new Gladiators will be spandex clad.

Viacom and News Corp Try to Get Youth Vote
A collaboration between media giants Viacom and News Corp will link MTV's "Choose or Lose" campaign with the political themed part of MySpace kown as the “Impact” channel. The two will have a series of co-sponsored town meetings with various candidates to held at several universities in key states. The first will be with Senator John Edwards in New Hampshire on Thursday, September 27th.

Countdown to the Mothership
MSNBC’s Countdown with Keith Olbermann will be touching down on NBC Sunday night at 7:00 p.m. for a special edition of the show before the preseason Sunday Night Football telecast. Olbermann, will also be co-hosting NBC’s Football Night in America once the NFL season starts up.

Carey’s Price Debut Date Set
The date for Drew Carey’s debut as the successor to the legendary Bob Barker has been announced by CBS. The start of the show’s 36th season on Monday, October 15 will be the first episode with Carey as host.

Fox Drops Anchorwoman
Fox has canned the reality show Anchorwoman after just one episode. The show was about a bikini model who tried to become an anchorwoman at a Texas television station.