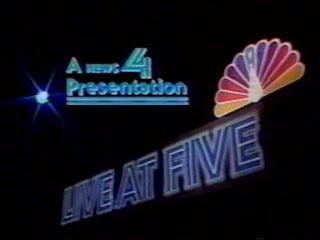 Live at Five is Gone!
Starting on September 10th, WNBC will be making a seismic shift on the local television landscape. Live at Five is gone, with infotainment show Extra taking its place at 5 p.m. with News 4 You remaining at 5:30 p.m. However, there will be not net loss of newscasts, since WNBC will be starting a new 7 p.m. newscast, but it is not as new an idea as it would seem, since WNYW aired a 7 p.m. newscast from 1987 to 1993. WNBC’s Station Manager and Senior Vice President of News, Dan Forman, noted: “Our news at 7pm meets the needs of viewers coming home from work and is a perfect compliment to ‘NBC Nightly News with Brian Williams,’ which precedes it.”

The current incarnation of Live at Five is nothing like its original incarnation from the 1980s and now more of a traditional newscast For those of you who may not recall the original Live at Five, it was a mix of news, interviews with newsmakers and celebrities, and lifestyle reporting.

Fellow NBC owned and operated station WTVJ in Miami is also making a similar move ditching their 5 p.m. newscast for one at 7 p.m., so this may be repeated at other NBC owned stations throughout the country.

There are even more shake ups with the talent. David Ushery and Lynda Baquero moving to the 6p.m. newscast, Chuck Scarborough will be anchoring the new 7 p.m. newscast solo, and Sue Simmons will only be anchoring at 11 p.m., still with Chuck. So this isn't simply moving one newscast into a new time slot.

Channel 4 will also be adding brief hourly news updates between 11 a.m. and 5 p.m. which will also be seen on their digital subchannel 4.4 and on their website.

The just released schedule also gives us official confirmation about the much talked about fourth hour of The Today Show airing in the 10 a.m. to 11 a.m. timeslot as well as a few other time slot shifts, with The Ellen DeGeneres Show moving to 11 a.m, The Martha Stewart Show moving to 1 p.m., Days of Our Lives moving to 2 p.m., and Merv Griffin’s new game show Merv Griffin’s Crosswords airs at 4 p.m.

Drew Carey Come on Down
If you haven’t heard by now, Drew Carey has been tapped to be Bob Barker’s successor on The Price is Right.

A Woman in the White House
The new president for the new season of Fox’s 24 will be a woman. Tony-winning actress Cherry Jones will be stepping into the fictional Oval Office and she sort of looks like Hillary Clinton.

Andrew Lloyd Webber Wants His Own Reality Show
Andrew Lloyd Webber, the person responsible for giving us Cats, is looking to get a piece of the fakeality television market apparently not learning the lesson from NBC’s You’re the One That I Want. A new production of Joseph and the Amazing Technicolor Dreamcoat may be the vehicle for the new show. At least it isn’t Jesus Christ Superstar.

Comings and Goings at CNN
NBC’s Campbell Brown will be heading to CNN while veteran anchor Paula Zahn will be stepping down. Zahn will be leaving the news network on August 2nd and will be taking a break from television. Brown will be starting at CNN most likely in November.

Dateline Hogwarts
If you missed any of Meredith Vieira’s interview with Harry Potter author J.K. Rowling on The Today Show this week, it and some more material will be on Dateline NBC on Sunday (7:00 p.m., WNBC 4). If you haven’t read or finished the book, don’t watch, since there will be spoilers.