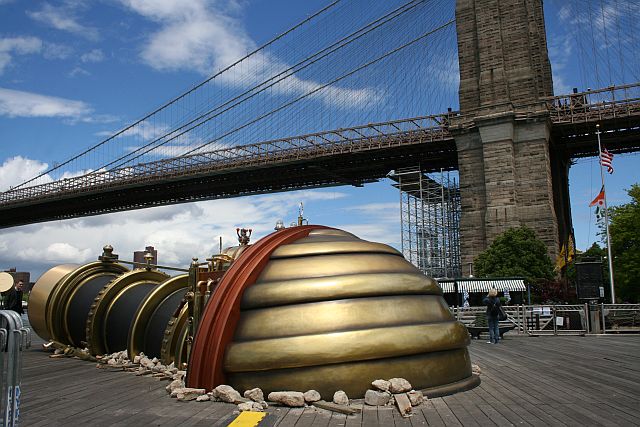 The most intriguing part of the Brooklyn Bridge 125th birthday party announced last week is the mysterious Telectroscope, located at Brooklyn’s Fulton Ferry Landing near the bridge. In this case the mystery is quite deliberate; the installation’s creator Paul St George has crafted a whimsical back story for the device, which purports to connect New Yorkers with Londoners using giant parabolic mirrors installed in a forgotten Trans-Atlantic tunnel. UPDATE:More photos here. 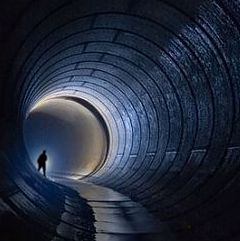 St George claims that his great-grandfather, inventor Alexander Stanhope St George, not only built the only working telectroscope in the late 19th century, but also worked on an unfinished tunnel across the pond, which Paul St George has been busy completing in time for the unveiling this month. The timing is apropos because, according to the artist, his great-grandfather attended the opening of the Brooklyn Bridge in 1883.

This amusing 1898 Times article marvels at news of the non-existent device and credits inventor Jan Szczepanik. And the Times of London points out that the word Telectroscope came about when a French editor misread a report about the invention of a thing called the Electroscope. At any rate, today’s Telectroscope, measuring about 6 feet in diameter, will probably use broadband internet to transmit live video between Brooklyn and Tower Bridge in London.

Produced by the same crowd that built that massive ambulatory “Sultan’s Elephant” in London two years ago, it’s expected to draw throngs on both ends of the visual tube. But if you’ve got someone on the other side you want to wave to at a certain time, you can try bypassing the lines by emailing St George with an explanation why you need priority access. It will be open for business from May 22nd to June 15th, supposedly 24/7.