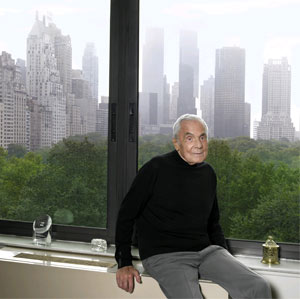 At 93, Ted Kheel could be resting on his laurels as a well-known labor lawyer and negotiator (the NY Times called him the "the most influential peacemaker in New York City in the last half-century"). Instead, he has been crusading, as his Nurture Nature Foundation explains, to address the "fundamental conflict between development and the environment." He has suggested that the subways should become free and will be releasing results from a study to prove why it can happen. (Photo by Roger Moenks)

You're working on a releasing a study this month that shows how to make NYC's subways and buses free. Can you tell us what we might expect?
The premise of our study is that there is an interrelation between automobile travel and mass transit travel, so that it is critical to look at both together to achieve a proper balance. This is what our city should be doing, but instead, we did it.

Our findings are preliminary, but I think you can expect the final numbers we release in January to be quite in keeping with them. We found that if you eliminate subway and bus fares completely, and offset the lost income through a combination of measures that make automobile trips into the Central Business District [CBD] more costly, those trips would drop by one-third, and traffic—both inside the CBD and in the entire city—would go down significantly. The same measure would also save a staggering $4 billion worth of working time, by eliminating more than 100 million hours of vehicle time that would otherwise be spent sitting in traffic. The plan would also generate about $2 billion in benefits from reduced pollution and various other types of savings.

Complementing the elimination of the fare, we would implement a number of measures to have drivers pay a fairer share of the cost of travel by automobile. We would implement a $16 automobile toll into the CBD, higher CBD curbside parking fees, and a surcharge on medallion taxi fares.

Many New Yorkers would love for subways and buses to be free, but are skeptical of such a plan actually working? What do you say to the skepticism?
I think the skeptics will be amazed, when they see our report. We have a brilliant team of experts working on this report, and they have been working for almost a full year. They are running the numbers, anticipating the problems, and finding concrete answers. We know what the concerns are, and we took them seriously and are addressing them. Your readers should look at our preliminary mini-report, posted on the web.

You've been advocating ecologically responsible innovation and sustainable development for many years - what do you think of the current green theme running through governments and the culture today?
Yes, I have been involved with this issue since 1992, when I attended the Earth Summit in Rio. Most of my career has been focused on resolving conflicts, primarily between labor and management. Since Rio, however, I have devoted myself in large part to resolving the conflict between development and the environment, which I see as the most important conflict humanity faces today. I am therefore extremely gratified to see the increased public concern in environmental issues. Global warming is the most serious problem we face, and the conduct that contributes to it is, for the most part, entirely legal. We need to find new solutions, and reducing automobile traffic in any amount, great or small, is one of many things we can do to contribute to a solution.

What do you think of the Mayor's PlaNYC initiative, which includes congestion pricing as well as buildings to be green and making sure the taxi fleet is "clean"?
I think Mayor Bloomberg’s approach is eminently sound, but that it doesn’t go far enough, because it looks at only one side of the equation-- cars, and ignores the other side-- mass transit. They cannot be viewed in isolation; they are interconnected.

Do you think the State does enough to help the city with sustainable development projects - as many people believe that congestion pricing may live or die by what happens with the Assembly and Senate?
We have not yet found a proper balance between city and state involvement in these issues. The mass transit fare is a good example. When I first became involved in transit issues in this city, in the 1940s, subway and bus fares were under the control of the Board of Estimate and its members would never vote for raising the fare, because they had to stand for reelection. That was later changed, and today, decisions on the mass transit fare, as well decisions about many of the tolls charged on our bridges and tunnels, are made by the MTA, and the city can only recommend appointment of four of the seventeen voting members of the MTA’s board are appointed by the state. I believe that the city should be given greater control over transportation issues that are vital to the well-being of those who live and work there.

You're also a well-known labor negotiator. What's the most memorable settlement you helped make?
I’d say my most memorable settlement was the one that averted a national railroad strike in 1964. President Johnson appointed me to a panel of two mediators, shortly after Kennedy’s assassination. It was the first crisis the new administration had to face. The issues we addressed had been subjects of contention for years, but we were able to resolve them in a period of fifteen days, and the solution stands to this day. In New York City, perhaps the most memorable and far reaching settlement was the one resolving the 1962-63 newspaper strike that crippled the city’s nine newspapers, lasted 114 days, and resulted in presidential intervention as well (that time Kennedy’s).

You're 93 years young and more active than most twenty-somethings - what's your secret?
Good fortune—I’m just lucky.

What do you think is the best transformation of a NYC institution, place or person?
Mayor Bloomberg’s courageous advocacy of congestion pricing, which he did not initially support, is certainly one great development. His leadership on this issue is a major milestone toward addressing our traffic woes.

What do you think is the most unfortunate transformation of a NYC institution, place or person?
I think one of the most unfortunate things that ever happened to our city occurred in 1962, when a law was passed that prohibited the Port Authority from financing rail transportation that was not self supporting, except PATH. The law was an outrage. The Port Authority, which was created to coordinate transportation, grew rich during the fifties collecting bridge and tunnel tolls on the automobile traffic into our city, and did not want to use its funds to help ailing passenger rail transit. So this law was passed, as part of a deal, under which New Jersey’s governor, who had opposed using the Port Authority’s vast resources to build the World Trade Center, withdrew his opposition, and the Port Authority agreed in return to help PATH, provided it would never have to help support another passenger rail line. That 1962 law was later repealed, but as a result of a Supreme Court decision, its effects lingered on for 45 years—until 2007. We are now, at last, completely rid it, and the Port Authority is once again legally permitted to help passenger rail transit.

And what subway and/or bus lines are you fond of?
I love them all. Unfortunately, due to spinal stenosis, I am confined to automobile travel, which is better than the alternative of not being able to get around at all. I would be pleased to pay more for traveling by car, as I think is right.

Do you have a favorite "only in New York" story?
Only in New York, could I get an opportunity to answer the sort of questions that Gothamist is asking about my views on mass transit and my historic involvement with this city!