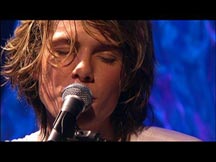 Yesterday saw the release of The Walk, the 7th studio album from Hanson. Yes, that Hanson. Over a decade has passed since "MMMBop" hit the airwaves, and now the Hanson boys are all grown up into men. Men who rock!

What's some of the craziest fan behavior that you've encountered over the years?
We've had a lot of people get tattoos. People will get a tattoo on their ankle or hip, and one particular fan had a larger than life sized image of my face tattooed on her back. She was very proud of it and would show it off in public, but creepier than the tattoo itself was the whole vibe that went with it. It's one thing to get a tattoo and it's an entirely different matter to cover your entire back.

At this stage, everyone in the band is married and you and Isaac even have children. How has this change affected your music and does that come through on the latest record?
I don't know if it's directly affected the music. It's changed our lives a lot in the sense that we have a whole different set of dynamics every day, whether we're on the road or making a new record. More than anything, it just makes every moment that we're living much more packed and full of activity.

Years from now, should we expect some sort of pan-generational Hanson super group?
I like the idea of a super group. My kids are pretty musical in their own way, so I think only time will tell.

How do you start off with introducing your kids to music?
The first thing I introduced my son to were bands like The Beatles, Queen, and Nick Drake. Just great, classic music. If Mozart is supposed to make babies think better, then I'm sure Bob Dylan, Led Zeppelin, and The Beatles sure can't hurt.

The Beatles, Queen, and Nick Drake all had their careers touched by tragedy. What do you do when your son asks, "Where's Nick Drake now?"
You know, that's not really the first thing a four year old asks, so I haven't really had to handle that one yet.

What's your strangest "Only in New York" moment?
We were at an after party where it was basically a drag queen and her posse at this party. It was complete mayhem. We were supposed to be at another place across town, but we didn't have any cash, credit cards, or anything and literally had to beg from different people at the party, all of who were fully in drag. Just hardcore transvestite mode. It was extremely awkward finding our way to the other side of town where I later had to do the same thing with another complete group of strangers. It wasn't really that crazy, but it makes me think that there's really no other place where you can go from some drag queen crazy party after an indie film to some obscure fashion event with no money and having to beg from strangers from totally different cultures. That situation just doesn't present itself in most places.

Given the opportunity, how would you change New York?
I'd plant more trees. Having lived in New York, I love the city, but there's just not enough oxygen being made. Sometimes you look around and it just feels like you're suffocating.

Which New Yorker do you most admire?
John Lennon. He represents the part of New York that acts like a magnet, attracting people from every culture.

What would you consider a perfect day of recreation in the city?
Going down to Central Park and playing some Frisbee or some other outdoor activity. A stop over at the MOMA. Grab an interesting lunch at Union Square, something with fried plantains maybe. Some shopping, and then catch a cool show downtown somewhere, like at The Blue Note.