Tattoo Artist To The Stars Will Ink You For Free This Week...But There's A Catch

If we've learned anything from the Sweetest Thing and the now-defunct Wreck Room bathroom, it's that nothing good ever comes from sticking a body part through an unknown hole. I want to say that came out wrong, but it didn't.

And yet! From 10 a.m. to 6 p.m. Thursday through Sunday, tattoo artist Scott Campbell will be seated in the Milk Gallery at the receiving end of an ostensibly sterile glory hole, tattooing whatever the hell he wants on the anonymous arms that protrude into his space.

The agreement is thus: YOU have the opportunity to receive free ink from a man who has tattooed Notoriously Discerning celebrities like Courtney Love and Robert Downey Jr. HE gets to spend 90 minutes making whatever permanent marks on whatever part of your arm he likes. A green-tinted penis on your forearm? The words "FUCK BITCHES LET'S BUTT CHUG" in comic sans across your hand? Ten tiny, identical Koch Industries logos on each knuckle? Up to him! These things aren't generally in Campbell's wheelhouse, but I don't think he made you any promises, now did he?

In a Q&A, the Times asked Campbell all sorts of sensible questions like "Why?," but failed to dig deeper into the fine print, like whether the tattooee is allowed to converse with him during the process, or what he'll do if someone's arm is covered in scabies.

Campbell tells the paper that "the great tattoos are always the ones that have great stories behind them," adding that "there is a bit of magic there in the exchange, the drawing-a-card-out-of-the-deck dynamic." He then goes on to compare his own heavily tatted body to "the bathroom walls of Max Fish."

I'm not saying don't do it, I'm just saying be careful. Last Christmas Eve, while hanging out at a friend's apartment in San Francisco, it was determined that a great way to jumpstart a night of bar-hopping would be for me to get an off-the-cuff tattoo. My friend's roommate, who happened to walk in the door during this discussion, sealed my fate. "Get an arrow," she said, her eyes flashing. "On your middle finger."

Will my children find that story terribly amusing? Will their teachers, when I have to go in and explain why little Tabitha or Cholula is acting out during Social Studies? I sure hope so. I suuuuure hope so. Because this thing ain't coming off, and neither will that urinal cake now permanently etched on your wrist. 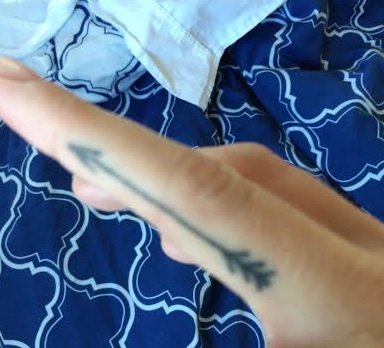 #milk gallery
#scott campbell
#tattoos
#whole glory
Do you know the scoop? Comment below or Send us a Tip