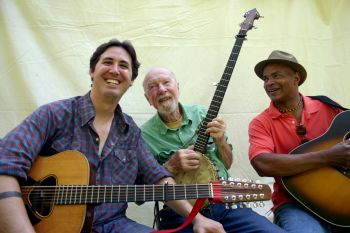 Tao Rodriguez-Seeger is the grandson of Pete Seeger, and has been performing with the folk legend since the young age of 16. This weekend he and his grandad will be joined by Seeger's longtime friend, bluesman Guy Davis (son of Ruby Dee and Ossie Davis). You can see the trio at the Brooklyn Botanic Garden's Chile Pepper Festival...but first, get to know them a little better.

Can you tell us a little bit about your musical history? When did you begin to play? Tao: I played my first concert in Hiroshima for half a million people when I was fourteen years old. My grandmother joked as I walked off stage, "It's all downhill from here!" We were in Japan on a family trip and as always my grandpa paid for vacations by doing a few concerts. We were invited to perform for the annual peace rally in Hiroshima on Aug 6th to commemorate the dropping of the bomb. I'll never forget walking out onto that stage to an ocean of humanity.

When did you start playing with your Pete? Tao: That concert in Hiroshima was more or less when I started playing with my grandpa. I was on his case about singing songs in Spanish with a bad accent. I grew up in Nicaragua speaking English and Spanish so I'm fully bilingual. I was adolescent and snotty but he turned that around on me and said, "If it sounds so bad, why don't you come up here and help make it sound a bit better!" I replied, "How hard could that be?" We've been playing together ever since.

Guy: Though I was present at a Clearwater meeting in Chinatown in the early 70's, and started hanging out with the folk music revival crowd in '75 or '76, it wasn't until 1977 that one day, Toshi took a snapshot of Pete and me. Pete told me that they were going to let me do some opening slots for him. Shortly after that, I was introduced to people like Malvina Reynolds, Fred Helleraman, Harold Levanthal and Moe Asch.

Did he give you any advice? Tao: He's never been much of an advice giver. I think he prefers to live his life the way he wants and to let people learn what they will from his example. At least that's the way it's always been between us.

Guy: Pete transposed one of Woody Guthrie's sayings and told me to "Take it easy, but TAKE it.

Is there a particularly memorable experience performing with him throughout the years that you can share? Tao: I can remember almost every gig we've played. Big and small there's always something worth remembering. In 1990 we were at the Tønder festival in Denmark with Arlo Guthrie. We walked off stage after an extended series of encores and out of the smoky haze of the audience people began to sing We Shall Overcome. Grandpa walked back out onto the empty stage, sat down at Arlo's piano and started to play with them. All the musicians who played the festival came out and joined in. It was spectacular but the thing that sticks with me the most is that I'd never seen my grandpa play piano.

Guy: Years ago, I learned the meaning of integrity. After driving from one gig in New England to another in upstate New York, Pete Seeger and I had a
couple of hours to kill. We sat in a public area with our backs to a fountain, snoozing before the show. I woke up to the sound of splashing behind me, and there was Pete in the middle of the fountain, with his pants rolled up, picking out the garbage. Several kids had joined him from the edge and were transporting the wet litter to garbage cans nearby. He wasn't just against garbage in the Hudson River, but filth and pollution everywhere.

What else are you working on now? Tao: I've got a band of my own. We're working on my next album this fall. It should be out sometime next year.

Guy: I've just finished recording a new work for Red House Records. It'll be my 9th opus for that company.

Are there any current bands you are enjoying? Tao: I love Jeff Lewis. He's one of the greatest songwriters of my generation. You can find his music on MySpace. I also can't say enough about The Foghorn Stringband from Portland, OR and Steppin' In It from Lansing, MI. The Duhks from Winnipeg, Manitoba are also a fantastic band as well as good friends.

Guy: My favorite bands are: The Otis Taylor Band, The Mammals, The Duhks. My favorite artists are: Kenny Neal, and Eric Bibb.

Who are your influences? Tao: There are so many musicians who've helped shape who I am. I guess it starts with my grandpa and explodes from there. Lately Manu Chao has been a huge influence on me. I love the way he mixes languages and genres without sacrificing the song.

How did growing up in Nicaragua influence you? Tao: The Nicaraguan experience is a hard one to deal with in a sentence or two but I'll try. I lived there from '80-'89. If you're a student of American history then you know that those were fascinating years. The United States was seen as the "enemy" there and so in many ways I was seen as the "enemy" by my peers. Bottom line is that I grew up with the sure knowledge that America had messed up big time. Our government is not always in the right. We live in an era where that kind of open mindedness isn't always seen as the most patriotic behavior.

Please share your strangest "only in New York" story. Tao: Back in the mid '90s I was working on the Sloop Clearwater. I was walking west on 79th St from the Boat Basin and turned left on Broadway and literally bumped into my childhood friend Alex Sherker. We hadn't seen each other in at least a dozen years. New York is the smallest huge city in the world.

Which New Yorker do you most admire? Tao: There are so many but I think I'm going to go with Marcus Garvey today.

Guy: Ms. Dorothy Desir is the director of the Malcolm X- Dr. Betty Shabbazz Center in New York City. She does important work helping to keep the legacy of these two heroes alive and meaningful with a reading program, cultural and artistic outreach, and community awareness.

Given the opportunity, how would you change New York City? Tao: We need to figure out how to live with fewer cars. It's not just the congestion but the air pollution too. More and better public transportation as well as encouraging cyclists could help. Politicians are going to have to start thinking about this sort of think otherwise cities are going to become uninhabitable.

Guy: To change NYC, I'd raise teachers wages, and improve after school remedial programs. I would increase housing and make sure it was fair and much more affordable. Anyone convicted of unfair housing practices, or discrimination against the homeless or helpless would be paraded throught the streets wearing a toilet seat around their neck. The wages of firefighters, police persons and healthcare workers would be brought up. More money would be made available to train people for the new jobs that are replacing the old ones. I would fund solar and wind energy. If I had my way, they'd have to assassinate me after about 4 days.

Best cheap eat in the city. Tao: San Loco for a fish taco and a beer next to Arlene's Grocery.

Guy: Any street corner Gyro vendor. (Especially in the Bronx)

Best venue to play/see music in NYC. Tao: These days I'm all about Pete's Candy Store in Williamsburg, Brooklyn but I like Southpaw and The Bowery Ballroom too. Carnegie Hall's not bad but a little impersonal.