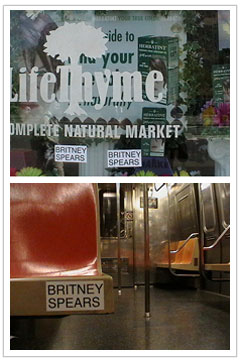 Have you noticed any Britney Spears stickers on the subway or sidewalk recently? The simple black & white design is littering the city, and it's not part of Brit's plan to gain some street cred.

Author Tao Lin has his interns putting them up as a promotional tactic for his new book. Psychopedia recently asked him about the origins of the idea:

On gmail chat I said something like, "I should make stickers that say BRITNEY SPEARS on half of it and my book cover on the other half to promote the book."

Then that got "edited" to just "BRITNEY SPEARS." I feel really good about the stickers.

He says that hipsters are more his target audience than “people in therapy," however maybe Brit would enjoy his latest release anyway, titled Cognitive-Behavioral Therapy.

Britney's also been seen in New York on the small screen, with some recent cameos on the Manhattan-based show How I Met Your Mother (YouTube).

#britney spears
#Cognitive-Behavioral Therapy
#how i met your mother
#promotional
#stickers
#tao lin
Do you know the scoop? Comment below or Send us a Tip