Filming recently began in NYC for the adaptation of Stephen King's opus The Dark Tower, starring Idris Elba as Roland Deschain, a.k.a. The Gunslinger, and Matthew McConaughey as his foe the Man In Black. Early photos show a leather-clad Elba uniting (reuniting?!) with Jake Chambers (Tom Taylor) on Lexington Avenue and 29th Street—in the Rose Hill section of Manhattan—and McConaughey strutting around like a slimmer Steve Harwell in a trench coat.

Details about the plot of the film have so far indicated this won't be a straightforward adaptation. King says this new organization of events "may upset some of the fans a little bit," as the first film will begin in what's perceived to be the "middle" of Roland's quest to reach the titular Dark Tower. The action of the film(s) could be viewed as a reinterpretation of Roland's story, which gives filmmakers license to streamline some of King's more outlandish plot details and doesn't require them to precisely follow the events of the books. 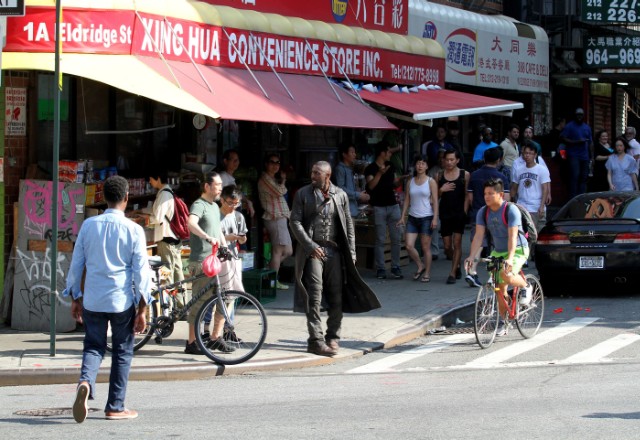 Early set photos support that idea, as book characters and locations intersect in ways not set forth in the source material. Today, filming was in Chinatown, in what appears to be a scene that occurred in the second of the novel series, The Drawing of the Three. Roland can be seen emerging from Big Johnny Gun Shop after purchasing ammunition; Jake was also on the Chinatown set today in what appears to be a separate scene. 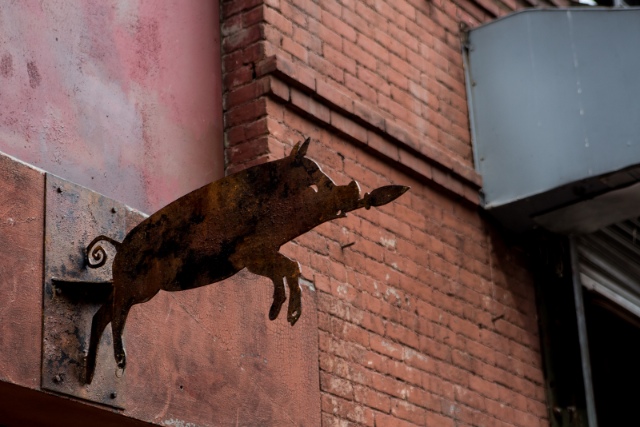 The exterior of the Dixie Pig (Scott Heins/Gothamist)

This coming weekend, filming moves to DUMBO—at a super popular intersection for such things. Without actors on set, it's difficult to predict which characters these scenes will feature, but there are a few Easter Eggs/references that will be exciting for fans of King's novels. Crews were busy prepping the exterior of the Dixie Pig, a restaurant for vampires and other unsavory creatures from the novels; it's being set up as some kind of music venue, from the looks of it.

There are also set pieces for two antiques shops, including one named for Kurt Barlow and Richard Straker, two characters from another Stephen King novel, Salem's Lot. Barlow is also mentioned in The Dark Tower series in flashback. A painted sign on brick further down the block reads Chambers Paper Fibres, a nod to Jake's character.

Also on the Dumbo set: giant pieces of styrofoam crafted to resemble stone masonry that's crumbled or been blown up. Showdown at the Dixie Pig? We'll have to wait 'til February to find out.

Other notable New York City sets have been in Stuyvesant Heights, where fans are speculating that the 1863 mansion at 87 MacDonough Street could be the house on Dutch Hill, an important location in Jake's story and his journey to Roland. It looks appropriately creepy:

Noticeably absent from any casting news so far have been Susannah (Detta Walker/Odetta Holmes) and Eddie Dean, two of Roland's main companions on his journey towards the Tower. If filming is working from an "in media res" standpoint, as King has indicated, they may be popping up in subsequent films; needless to say for readers of the novels, they can't not be included. Also absent: any mention of Oy, the billy-bumbler character that would likely be some kind of CGI creation.

Speculating on how all of these set pieces will tie together to tell Roland's story will be a source of hours of amusement until the film is released next year. If production photos pop up anywhere near 885 2nd Avenue, expect to hear a lot of screaming across the internet.

#dark tower
#filming
#idris elba
#Matthew McConaughey
#stephen king
#the dark tower
#original
Do you know the scoop? Comment below or Send us a Tip