Talking With Caveman About Being A Band, And The Best Dollar Slices

New York-based indie rock band Caveman have been kicking around the local music scene since 2009, getting their start playing LES venues like the Bowery Ballroom and Mercury Lounge. Their second, self-titled album is being released this week, and the band—comprised of Matthew Iwanusa, Jimmy Carbonetti, Stefan Marolachakis, Sam Hopkins and Jeff Berrall—will be accompanying its release with a hometown show at Webster Hall on April 10th. We sat down with the band to discuss the new album, touring, and how the city music scene's changed over the past few years.

Caveman is actually a little bit of a departure from the first album, yeah? What was the process of making this one? Some of it was written when we were traveling, other stuff was written here in the city, and then we kind of got…like a lot of the songs we played on the road were while we were on tour. So a lot of those, we went in the studio and did it live. Some stuff was written in the studio—it's kind of a mixed bag of everything, but the vision was there the whole time, to just make it this big sounding thing.

We worked for the same producer, he played in the French Kicks, and we did our first—CoCo Beware—with him, in DUMBO. And then we met these two brothers, Albert and Phil, and Phil did our music video for Old Friend, and Albert engineered the record, at the studio. It was just way bigger than the first record, and we were touring for two years between then, so we felt like we got our sound from that. 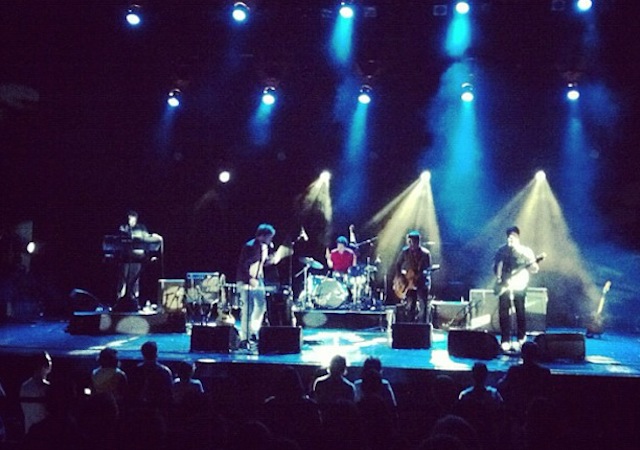 And how was this vision a departure from CoCo Beware? We were seeing a lot more UFOs, getting more into the universe vibe.

It does sound like an alien tune a little bit…something otherworldly. Thank you! I think we've just been playing music with each other a lot more, and just—our brains connected a lot more. The initial idea we were all talking about was just to get a little less of a blurred line between everything. Seeing a UFO in the woods was kind of our vision.

When you're touring, is it always good to come back to New York? Yeah, the best. You grow up here, it's like, you're just such used to fast-paced and a lot of people around, and you just do whatever you want at any time. So then traveling is amazing, but then you realize the bars close at 2 am, and you're like, "What?! I'm just getting started!" You can't get the sandwich of your dreams in the middle of the night.

So you guys kind of came together in 2009... how did you go from being this little New York band that played Mercury Lounge and Pianos, to being the most blogged about band over the past 3 months? Practice, practice, practice. Our first show was actually at Bowery Ballroom, so it felt we all played in bands, Jimmy and Matt were in The Subjects [ed. note: one of the first bands to play our old Movable Hype shows!], Stefan was in The End of the World and Jefferson Elephants, Sam was in White Plan, and we were all at different levels, so we've played most of the places in New York and established great friendships, and you know other bands, and we've just done it for so long, and you know, when we started this band, it felt like our goal was not, '"Alright, we're in a band, we're going to start." It felt like we were doing this for so long that we just wanted to start off and have goals of really big picture, just play weird shows, just play in Brooklyn Museum or BAM, and just do interesting and different things rather than the standard.

I've read that one of the ways you got spread around is that a friend of yours worked at a bar and was playing your album all the time. Can you talk a little bit about that? Yeah, it was this crazy dude, we call him 5-0. And he's very—how to say—obtrusive? He's a nice guy. He's a crazy, crazy man. We all like him a lot. He worked at this bar, and we would go in there when we were recording the first record, and he'd be like, "give me your phone right now!" And so we'd have to give it to him. But it was fun to listen to, it was fun to hear it in a bar. We got ideas from that. Like oh, we should change this, or we should do this. To check out songs either you've made or that are in progress in a space where you normally listen to anyway, it's really valuable and and it's really exciting.

You guys have been in the music scene for a while, even before you became Caveman. How have you seen it evolve over the past few years, especially with younger bands? It's gotten way closer. [In that] movie on Dee Dee Ramone, he was just saying that back in the day every band was just at war with each other. A band would put up a poster, if it wasn't your band, you'd rip it off. Now, when you see one of your friend's posters coming down, you tape it back up. You know, it's like just that community vibe. Everyone's here to help you. We're all playing music, and that's been a big part of the NYC change in the scene. There's a lot of great music, and great people. Less drama.
Arte Lange mentioned that, he was like, "What! These bands are so nice these days." Being mean doesn't get you that far. No one has the time to deal with that.

What are some bands that you like right now, who you hang out with, or listen to? Here We Go Magic, or Sinkane. War on Drugs are great. A band See Through, our friend James just started playing. They've had a few shows and they're really great. Sweet Rumors. Rumors is great. It's fun,there's a lot of new bands who are really great. Sinkane, they're the best live band right now. Check out their record, Mars! It's pretty sweet.

Is there a division between the Brooklyn music scene and the Manhattan music scene? It's all the same. But even then, there's a Queens scene, and a Staten Island scene. I think it's more of a neighborhood thing. There's a lot of really good rap music going on in Queens right now. There are pockets, it's cool. They're all concurrent. They overlap, like, a lot of those scenes are tuned into each other. It's more than boroughs even, it's like, in Brooklyn there's St. Vitus in Greenpoint which is a crazy metal bar, but then there's also Music Hall of Williamsburg, and it's just great. There's just so many venues now, and every different day of the night they'll have a different vibe of music. It's all a big soup, and it's more of just personally who you're hanging out with, rather than scenes.

Any advice you guys have for young, struggling, New York musicians who just want to make it big one day? Don't stop. Don't quit. Just play music until you die. If you made it this far, keep doing it. And actually, remember to play as much as possible. Especially in the big city, you can get lost in all the other funny things that are attached to having a band, other than playing music. Sometimes people forget that you should just clock as many hours as possible playing music. And go out at night and hang out. Watch Knicks games. And don't be upset if you can only buy a dollar slice of pizza, because we still do that sometimes. Some of the dollar slices are better than the regular slices. $8 gets you a pie!

Who has the best dollar slices? Champions on Essex! It's the best in town. Also the Two Brothers on 30th and 8th Avenue isn't bad.

#caveman
#fat possum
#interview
#original
Do you know the scoop? Comment below or Send us a Tip