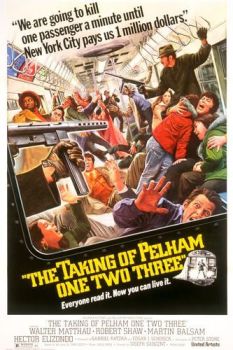 Move over, remake of The Warriors: Variety (subscription required) reports that Denzel Washington will star in the Tony Scott-directed remake:

Washington will take on the role of Zachary "Z" Garber, which was played by Walter Matthau in the original 1974 Joseph Sargent-helmed film. The story, based on a novel by John Godey, also spawned a 1998 TV movie starring Edward James Olmos.

The latest incarnation takes place in contemporary New York and is set in motion when four hijackers take over a subway train and hold the passengers for ransom.

Production will reportedly start in the first quarter of next year. And we have so many questions, such as: What will the ransom be in this version - one million seems a bit chintzy/Dr. Evil-y... perhaps $100 million? Will the action take place on one of the new R160 train lines? Or will it be on the 6 line, which does have the relatively newer trains anyway? And will there be an updated version of the line, "Screw the goddamn passengers! What the hell did they expect for their lousy 35 cents - to live forever? " ("What, for a $76 unlimited card [or whatever the new raised rate is], they wanna live forever?"

As it happens, Tony Scott is the director attached to the remake of The Warriors (set in LA!), but since no stars have been announced, we're going to bet that The Taking of Pelham One Two Three gets made sooner. And Washington will appear in another NYC-set drama this year: American Gangster, which comes out next month.