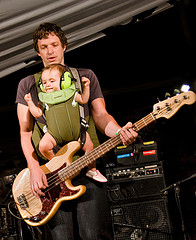 Syd Butler plays bass for Les Savy Fav, who have been a staple in any good rock n' roller's iPod since before iPods were invented. Recently he's brought his baby on stag to share in the action, and even more recently (this past Tuesday) his band released a new album, Let's Stay Friends. Tonight they play Music Hall of Williamsburg, and tomorrow Bowery Ballroom (and in October, Randall's island with Arcade Fire).

Let's get this out of the way, where did the band name originate? Does it mean anything?
The name means whatever you want it to mean, it's an abstract expression. Gibb Slife (ex Fav member) came up with the name while we were sitting round at a restaurant in providence, RI. we didn't want a referential name like a lot of other bands at the time, so when he suggested les savy fav it stuck.

What can fans expect from your new album?
Let's Stay Friends is an album that we are all very proud of. We had a lot of friends come in and participate in the making of the record which was fun and amazing. Chris zane did a great job and we were really excited to be able to work with him again. this is definitely a more mature record, we took a chance with the songs because we didn't want to repeat ourselves and i think our fans will appreciate that. Every guy in the band has a favorite song, so i think there will be something for everyone.

Have you seen any good entries that have stood out in your YouTube video contest for The Equestrian?
All the videos are great and we are psyched about the submissions. I have a favorite moment in each one of the videos. Eventually, we're hoping to edit all the videos together to make one video.

When was the first time you brought your baby on stage? Where do you get the baby headphones?!
The first time she came on stage with me while I was playing was at the CitySol show. The first time that she was on stage was at Coachella for the Arcade Fire (they rule!) Her headphones are a special order from Norway. My very good friend claes got them for her as a gift a while ago. They have come in handy lately as my daughter has become quite the queen of the scene. She's going to be the kid at 13 that is REALLY over everything- looking for baby-sitters now.

You've all seemed to make the family and rock thing work very well, how did Tim and his wife get come up with Deadly Squire, and with Harrison -- Branch Gallery?
SYD: Harrison is a painter and him and his wife both went to RISD and They always wanted to run a gallery as they have always been part of the art world.

TIM: Anna and I decided to start Deadly Squire based on a common love for Scandinavian design. Anna's mother is from Sweden, she and Anna really turned me on to the world of Swedish textile design. Anna is a painter and a friend of ours had asked her to design a towel using some motifs from her work. I do a lot of graphic design when I'm not rocking the world, and I helped my wife (then girlfriend) get here drawings on to the computer and ready for printing. In the process I couldn't help but do some patterns myself, by the time Anna was ready with her final design we had tons of other pattern ideas and designs and decided to try an make a business of them. It is a lot of work but seeing the company grow and being in business together is a lot of fun. I still work a lot outside of DSQ as a designer but we have big plans to expand in 2008 and make it something we can afford to do full time. Check out the website at www.deadlysquire.com - I made the site. There are a lot of funny product descriptions and drawings I've done up there.

How have you seen the Brooklyn music scene change in the past 12 years?
The Brooklyn music scene has changed a bit since the early 90's when musicians and artists started moving there because rent was so cheap. Obviously millions of bands started to form and people began to start talking about the "Brooklyn music scene". I think from there, the major label industry has taken something really organic and original and has kinda of overexposed the bands and the "scene". i don't think that it's changed the dynamic so much, but when we are on tour people always ask us about the Brooklyn scene and i really don't know how to explain it.

A couple of years ago i was walking around in the upper east side with my girl and we walked by a godiva store. i'm obsessed with chocolate so we stopped to look in the window and check out the goodies. right there in the center of the display was a tier of these delicious looking chocolate covered strawberries (yum) and as we're staring them drooling, we noticed this huge mouse on top of the tier! it looked like he had already downed 3 or 4 of the strawberries - so insane. we're laughing about it and this older couple walks by and we say "hey check out this mouse!" and we all start laughing cause we're all in shock. the couple decides to write a note and leave it under the door to let the store know about the mouse and that they should throw away the strawberries. the next day my girl and i are down in battery park city for this US open event and we are waiting in line and who comes up behind us to wait in line, but the older couple from the night before! small world.

Which New Yorker do you most admire?
Al Smith - you should Wikipedia him.

Given the opportunity, how would you change New York?
I would try to follow in the footsteps of Al Smith.

What's your current soundtrack to the city?
The new National record. I'm such a fan. Great record.