Well-known street artist Swoon teamed up with a group of over 40 teens from Sandy-affected communities around the city for the Recovery Diaspora series. The capstone mural was unveiled yesterday at the Bowery Mural Wall on Houston Street.

Groundswell is a community arts initiative that works in struggling areas, utilizing the youth, artists, and other community members dedicated to social and economic change. Created with participants from probation programs and art schools, this mural is the final piece of a project that over the past five months has produced four other pieces in the Sandy-effect regions of Red Hook, Coney Island, Far Rockaway, and Staten Island. 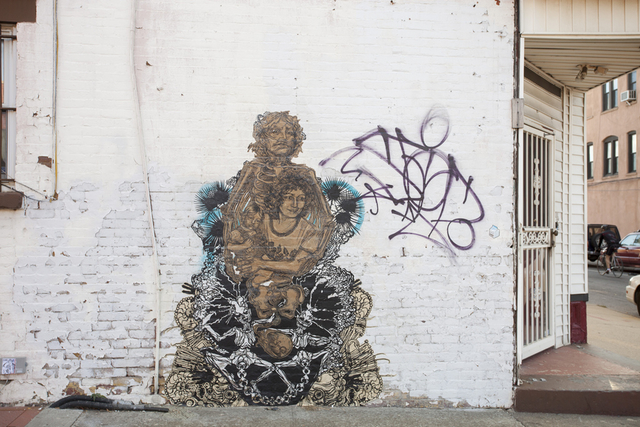 Swoon and Groundswell had been neighbors in the Gowanus area for some time and were keen on doing a project together. Around this time last year, the artist was approached by Goldman Properties—the group that owns the Bowery Mural Wall and invites artists for temporary installations—and as the immediate aftermath from Sandy was being dealt with, Swoon recalls "people were starting to ask... when are people ready to start processing things through telling a story and creating artworks and doing that thing where you shift the morale of a community by beautifying."

Groundswell began working with youth employment groups in the area, sending them out to visit different communities and gather stories and ideas. "They came into my studio and I sort of talked them through various kinds of philosophies of image-making," Swoon said. "Then they went out and did the interviews and image gathering, and some professional mural makers helped them synthesize" their ideas and provided technical advice on how to achieve their artistic vision.

It's a striking piece, centered by Swoon's depiction of the Greek goddess Thalassa, and surrounded by the contributions of the teen artists, inspired by visits with locals, business owners, neighbors, friends, family, and strangers. Swoon's contribution is notable, but comparatively minor, and energized by the disparate styles and pieces that adorn her contribution. Community specific symbols and narratives abound.

Swoon talked to us briefly about the impact she hoped this project would have: "There's something so direct about the impact of creativity that whether your participating in it and you're feeling yourself change your environment or if you're just seeing a change happen... The fact that you're able to see positive change happen directly contributes to the sense of possibility that people have in difficult circumstances. Everybody loves the word empowerment, so much so that we almost forget what it means. I was thinking how important it has been for me in my life when I've been able to do something that showed me that I could make an immediate effect on my environment. It alleviates a sense of helplessness in a very real way."

With Banksy in town, there's been an intensified focus on street art, graffiti art, and the juridical concerns surrounding them both. Where does this piece stand? For Swoon, the project "has its roots more deeply in the long history of mural making. Illegal street art making is a part of my practice that I will never let go of. It's always gonna be a part of what I do. But, it's not the main and only piece of what I do. I have so any different ways of thinking that I love the vitality of being able to go out and take a space and declare a space, but for me it's not my singular point of reference of the way to work in a community."

And what about our mysterious friend? "I'm running around so much and they get gone so fast that I haven't seen any of them. I love to see somebody activating this much of the public dialogue. I love mischief-making. It makes me really sad that... I just can't get behind haters. I get a critical dialogue. I absolutely understand that there are problematic things to what we are doing. None of us are perfect. I just can't get behind haters. He has a good sense of humor about it. [Maybe] I'm a little too earnest about things. But for me, I want those pieces to remain part of the life of our city."

#bowery mural
#Swoon
Do you know the scoop? Comment below or Send us a Tip