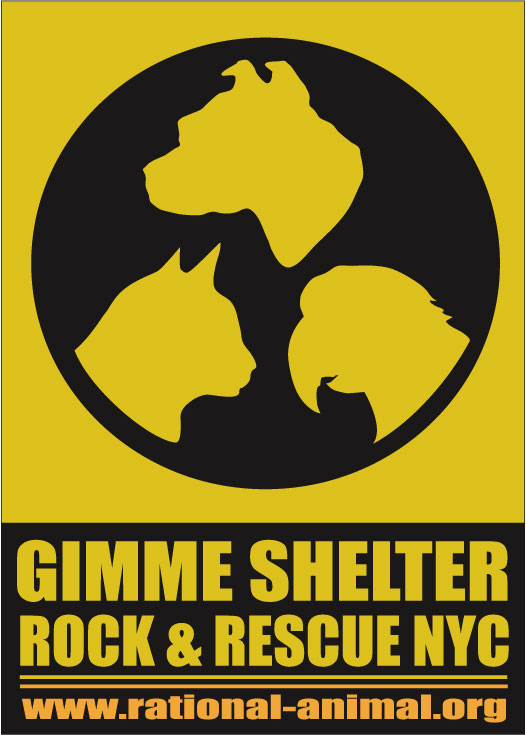 In 2002 Susan Brandt founded Rational Animal, an organization whose mission is to increase public awareness about at-risk animals in New York City. In continuing their mission to increase awareness about animals in need in NYC, they're hosting their 3rd Annual Gimme Shelter: Rock & Rescue benefit show on October 6th (tickets). Debbie Harry, Moby, Adrock, Gina Gershon, Earl Greyhound and many more will all be on hand in support of Brandt's cause. This week she told us about her passionate mission, Bloomberg's goal to end euthanasia at city shelters by 2015, and what New Yorkers can do to help out on a daily basis.

How did Rational Animal come to be? My moment of inspiration was when I realized how mad I got about people driving on the beaches in Cape Cod and killing the plover hatchlings. I thought if there was a sign on the beach or a local tv psa, people would at least know the issue and could help the animals if they care. I put flyers around the Village to recruit people interested in coming up with new ideas and getting to work.

Can you tell us a little bit about the organization? We’ve done a lot of projects in the 6 years we’ve been around. We’ve produced four NYC shelter maps distributed in all NY Public Libraries branches, pet-related businesses, coffee shops and public events. For five years in a row we’ve produced a weekend long winter holiday gingerbread house humane education event called Gingerbread Homes for Animals held in Central Park and Chelsea Market with seminars about animals and kids activities. We produced a set of PSAs promoting adoption that have had a great run on NY1 and WABC and which we sell at cost to communities around the country to localize and use. In 2003 we reserved the orange ribbon with the US Patent and Trademark office to represent at-risk animals and have started that campaign to raise funds for animals in NYC.

We’ve also done lots of video: a short about Mayor’s Alliance for NYC’s Animals, the Cat Show Adoption promo that runs on the MSG Jumbotron, and we produced a video with Tippi Hedron at her big cat sanctuary for the Animal Law Committee to show at the ABA (American Bar Association) national meeting.

Our newest project is called “Mother’s Comfort Project” which are monthly bed sewing sessions for animals at the Brooklyn AC&C. So far we’ve delivered about 250 homemade beds. The animals there are so happy to have an nice smelling bed and give you their most grateful expressions.

I’ve been a guest speaker several times for the kids at Hunter College Elementary School and was asked to speak at press conferences in support of the circus ban with the League of Humane Voters, and in support of helping the carriage horses for Coalition to Ban Carriage Horses. We worked with Pearl Jam, the Buzzcocks, and the Beastie Boys to reach people at Nassau Colliseum and Madison Square Garden. Then we started Gimme Shelter and this is the third benefit rock concert we’ve produced.

What can attendees expect from the Gimme Shelter event? Lots of fun! From 7-midnight we’ll have 8 live bands and after that we’ll have a big dance party. Our production team is top of the line, so it will be fun to see the whole thing happen. We have some really cool raffle prizes and for a few hours we’ll be serving free drinks. We’ll honor the 10 rescue groups on stage and give them gifts and hopefully lots of money.

How do you feel Bloomberg's goal to end euthanasia at city shelters by 2015 is going? It’s better than it was but there is still a long way to go. 40,000 animals are brought to city shelters, 30,000 are killed. You have to look at all the people who give up on their animals everyday, who don’t spay or neuter, or who buy from pet stores -- all these things contribute to overpopulation and animals without homes.

What can New Yorkers do to help out animals living the "urban life"? There are so many animals to cover, but in the world of dogs, dogs are pack animals and they like to meet other dogs, so let them socialize! Also, being alone a whole day without any company is depressing for dogs - there is such a thing as a latchkey dog – consider adopting dog friend if you are away from home for long periods of time. Never tie your dog outside a store where you can’t see them – people do actually steal dogs and use them for bait in dog fighting rings. If you see an animal suffering who is being kept by an abusive or neglectful person, report them to the police, and do your best to see the animal into a better situation, without endangering yourself of course. Sometimes it takes more than one call to make a difference for that animal.

What should one do if they notice a homeless animal living in their courtyard or nearby their apartment? Do what you can to gain their trust. Usually they are scared, maybe they were kicked out of their home, try to give them food and shelter. Be brave, cautious, kind and persistent. If you can get their trust, but can’t keep them, become a “desktop rescuer” by going to the Mayor’s Alliance for NYC’s Animals website, they’ve got a huge resource of over 150 rescue organizations and shelters, start calling to find someone to help, ask friends and family, don’t give up! In the case of feral cats, you can get training in Trap-Neuter-Release and take on the venture of reducing the feral cat population in your area.

Please share your strangest "only in New York" story. There were two dogs living wild in Central Park for several years. Many of us were feeding them and couldn’t get close enough, they were super independent and fearful of people. Finally this woman from Australia took it upon herself to camp out near their den area in the Park. After a few days she was actually able to get a collar and leash around them and brought them to a local rescue, I think eventually they ended up on a big rural home out west.

Which New Yorker do you most admire? The unsung, undercover pigeon rescuer.

Given the opportunity, how would you change New York? Rebuild the municipal shelters and put some of them in locations like Tribeca with big picture windows so they can compete with puppy mill stores. Allow dogs on public transportation and in restaurants. Ban the carriage horse industry and the major circus that is now in court because of their abuse of their elephants.

Best cheap eat in the city. I’ve been into making salads lately, cutting up vegetables is therapeutic.

Best venue to see music. The HighLine Ballroom of course, I just saw Dave Stewart there, the sound was great.

#Gimme Shelter
#interview
#Rational Animal
#Susan Brandt
Do you know the scoop? Send us a Tip