Next year, the NY/NJ Super Bowl will be held at MetLife Stadium on February 2. And it will probably be cold. So the host committee is taking advantage of that by offering a huge toboggan run in Times Square. We're now taking bets on how quickly diehard pedestrian plaza-hater Steve Cuozzo will get run over by a sled full of tourists.

According to the Daily News, "Broadway will feature an eight-lane, 180-foot long, 58-foot-high toboggan run able to handle up to 1,000 riders an hour. The run — between 40th and 41st Sts. — will be open from Jan. 29 to Feb. 1, the day before Super Bowl XLVIII is played at MetLife Stadium. The plans for the toboggan ride, along with other events and exhibits, will be officially unveiled on Tuesday." 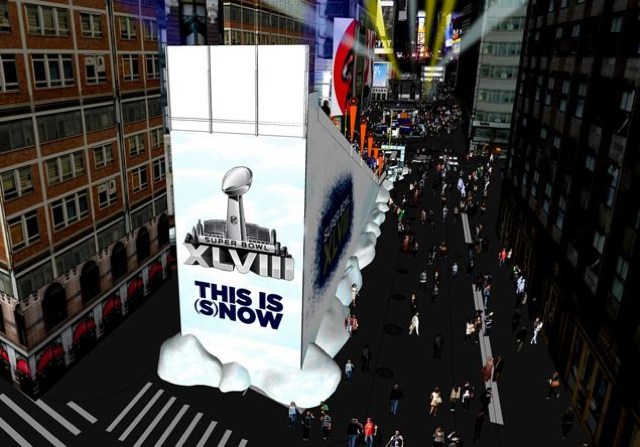 The back of the toboggan run

For those of you who think a cold weather Super Bowl is "retarded," Freakonomics co-author Stephen Dubner looked at cold weather scoring and found, "So even though it's a bit harder to complete passes and kick field goals in colder weather, NFL teams end up scoring just about the same number of points. Why? One good reason might be technology: Players' gear and uniforms, field surfaces, and toasty benches probably help compensate for the harsh natural conditions."

#super bowl
#super bowl 2014
#Times Square
#toboggan run
Do you know the scoop? Comment below or Send us a Tip