A huge swath of Manhattan streets will be free of the scourge of car traffic this August, as Summer Streets returns to Manhattan for three days next month. And if the thought of a gigantic waterslide wasn't enough to get you going, how about the chance to tumble around in an enormous water park shaped like a dishwasher. Yes, that is a real thing that will exist.

The DOT announced the return of the car-free streets in Manhattan in a press release today, promising pedestrians ample room to roam on August 5th, 12th and 19th. On each of the three Saturdays in August, Park Avenue, Lafayette Avenue and Centre Street will be closed to cars between Central Park and the Brooklyn Bridge from 7 a.m. to 1 p.m. In addition to enjoying extra space to lollygag and loaf, each street will be full of activities for pedestrians to enjoy.

At Astor Place, pedestrians will be able to play New York-themed mini-golf and go on a virtual reality climb of Mt. Everest. There'll also be an opportunity for the truly brave among you to go on a New York City smell tour ,in which researcher Kate McLean leads you on a "smellwalk" around the Astor Place neighborhood during which you'll be "using techniques such as smell catching, smell hunting and free smelling." Nothing like those NYC summer smells baby!

The 270-foot waterslide at Foley Square will return this year, for anyone who missed out on it last year or just wants to take another plunge. Also returning will be a 165-foot long and 30-foot high zip line at the Uptown Rest Stop. Joining the zip line at the rest stop this year will be a bouldering wall courtesy of Brooklyn Boulders, as well as a demo station that will give you tips on going green and perhaps saving the planet from a fiery future. 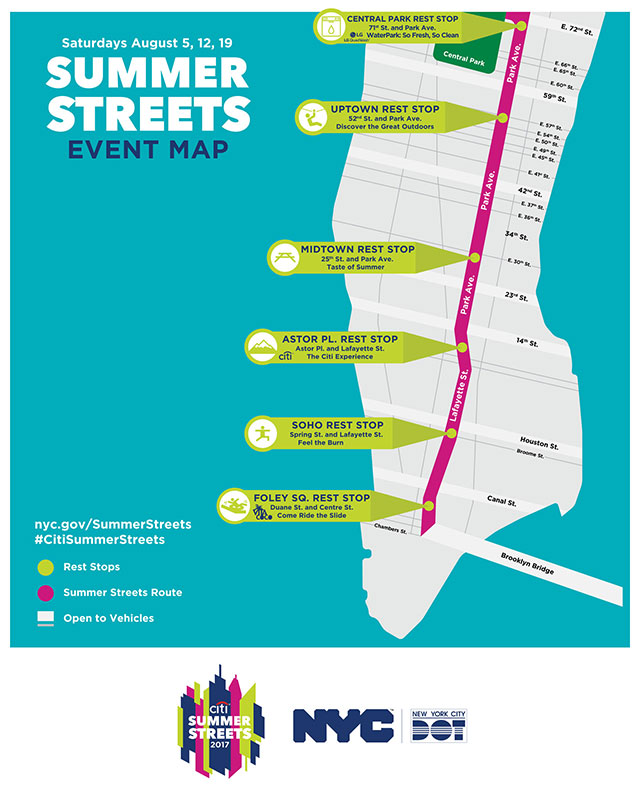 About that giant dishwasher though. Yes, it is a real thing. The "Central Park Stop," at 71st Street and Park Avenue, corporate sponsor LG is setting up what they're calling the LG QuadWash Water Park. The water park, designed to be the kind of gigantic dishwasher that everyone has dreamed of playing in at one point or another, will be a 30-foot wide by 50-foot long inflatable monstrosity that will "feature obstacle courses continuously soaked by powerful jet streams, massive slides in the shape of cutlery, and hanging glide rails for kids of all ages to zoom down into pools of water." Whatever it takes to sell more consumer goods to a population stuck with stagnant wage growth, I guess.

Here's a look at last year's Summer Streets fun to tide you over until August.