Summer Is Here, But Where Is Thong Guy?

For years, summer in New York City has settled in simultaneously with the appearance of Thong Guy—a man we know little about emotionally, but plenty about physically. His presence has been consistent in the city's parks since at least the summer of 2009, and last year he took up residence at least once a week in a very specific section of Brooklyn Bridge Park.

We planned on speaking with him for an interview on this very site, but as the summer days went on he stopped showing up. The last recorded sighting of him we have is August 18th, 2011—on that day a friend emailed us to announce his return after what would be his first hiatus: "Our normal lawn was closed so we were at the main lawn instead—and when we arrived, THONG MAN was there! So he's okay! I know you were worried about him." And that was it... he never showed up again (to our knowledge). Since then we've scoured the area on sunny days hoping to see him, but he's nowhere to be found.

We hear summer has indeed arrived, but we refuse to declare it until we see that iconic yellow thong. Where did he go? If you have any tips, please send them our way. And keep in mind: it's possible that Thong Guy has by this time changed the color of his thong, so be on the lookout for thongs of all colors. He may have also gotten a haircut. 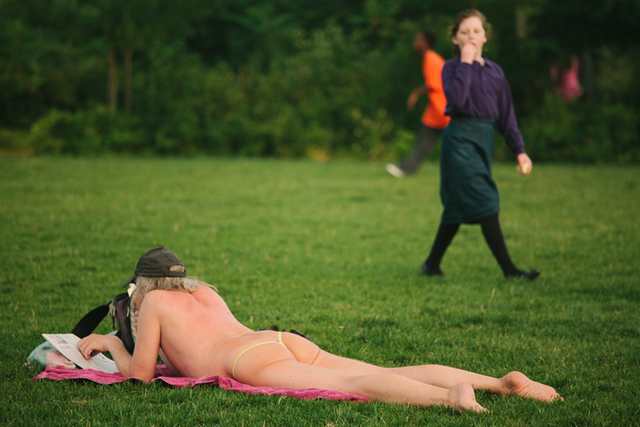 #M.I.A.
#thong guy
#where are you
Do you know the scoop? Comment below or Send us a Tip