You may remember that in the immediate aftermath of Donald Trump's election victory, thousands of New Yorkers took to the subway tunnel under Union Square to register their anger, shock, despair and confusion in the form of Post-It notes.

Nearly ten months have passed since then, and President Trump has only grown less popular in that time. Now, in response to the violent white supremacist rally in Charlottesville, the artist behind the original Post-It wall is back, giving New Yorkers another shot at "Subway Therapy" starting Thursday and stretching through the weekend.

"My intention with this project is to get people to write from their heart and their mind," Levi Chavez, the project's creator, told Gothamist. "But it's also a chance to see how other people are reacting, so that we can all connect in this struggling time."

By mid-afternoon on Thursday, the bypass tunnel at 14th Street between 6th and 7th Ave had over a hundred messages, most of them heartfelt expressions of solidarity with those who protested hate in Charlottesville.

"Dear Charlottesville, I'm sorry. I'm angry. I'll do shit for you. I'm determined to help. Revolution, y'all — NYC," one person wrote. "We all need to examine our lives for white supremacy," read another.

Travelers from Barcelona and Texas included their own messages on the subway wall, while others drew images of hearts and rainbows. 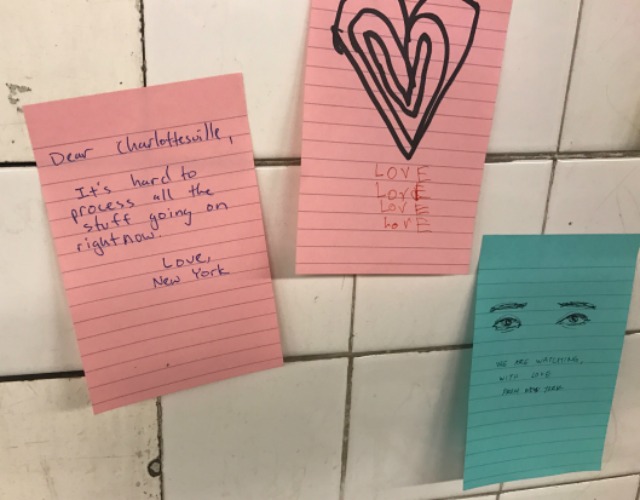 "I think there's been nothing so absolutely striking as the news in Charlottesville," said one note-hanging passerby. "It was the one day I woke up and cried at the news since the election."

Chavez, who has set up the project in this bypass tunnel and elsewhere a few times since the election, agreed that people stopping by this iteration of the mural seemed especially mournful. He confessed that it can be emotionally challenging to engage with so many people, and noted that a few racist and vulgar messages have appeared on the wall. But overall, he said the project has proved to him that "people are really amazing."

"I think it's really necessary to see other cities reaching out instead of pretending it just didn't happen," added Isis Jacobsen, a 16-year-old student. "I'm wondering how it can be channeled into a productive way to help people in Charlottesville and beyond."

#charlottesville
#post-it notes
#subway
#subway therapy
#white nationalists
#white supremacists
#original
Do you know the scoop? Comment below or Send us a Tip