Sometimes you need to bring your bike on the subway. Maybe it's raining, maybe you got a flat tire, maybe you didn't have time to drain your sebaceous cyst today? Look, it's really none of our business, except that when you lug your bike on a crowded rush hour subway train you've got to expect a little stink-eye. The MTA doesn't charge extra for bikes in the transit system, but our social compact clearly states that dirty looks are the price cyclists must pay during rush hour. Of course, there's an easy away to spare yourself seething wrath of a packed subway train: act like it's not your bike.

These photos were taken by a tipster on the Brooklyn-bound L train last night (no, it wasn't raining, so have some compassion for the sebaceous cyst sufferers). Our tipster, who asked to be identified as Mrs. McEvoy, says the first photo was taken at 5:37 p.m. at the Eighth Avenue stop (that's the first stop for Brooklyn-bound trains, and there's usually ample room if the trains are running on time). Mrs. McEvoy tells us the man in the Superman T-shirt secured his bike to the pole, then sat down in the corner to do paperwork.

"None of the passengers can figure out who the bike belongs to and as they fill the car many look around confused," McEvoy narrates. "A few seemed upset enough to try to find the bike's owner but he's placed him self strategically enough that nobody sees him." By the time the L reaches 14th Street, the bike nearly disappears in a fleshy fog of commuter crowding. 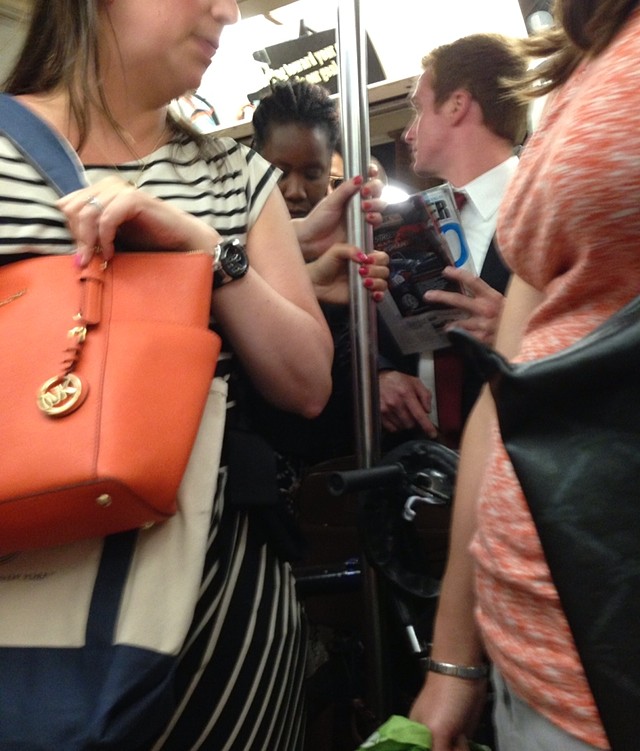 "A lot of head shaking at this point," McEvoy recalls. "A pregnant woman standing behind the woman with the orange purse loses her balance because she is forced to twist awkwardly to reach the pole (I would have offered her my seat but there was no way for her to make it where I was sitting because of the clog caused by the bike). As for the selfish asshole who did this, he's still sitting in the corner doing his paper work."

McEvoy left the train before Superman reclaimed his bike, and adds, "I could have throttled the guy, you could tell he's done this before. He had it all worked out." But instead of resorting to violence, McEvoy did the right thing: sending the photos to us for our ongoing Subway Etiquette series!

#cyclist
#MTA
#rush hour
#subwayetiquette
#subways
#original
Do you know the scoop? Comment below or Send us a Tip