Subway Mystery: Who Turned The G Train Into The Pee Train?

Every New Yorker knows the subway was invented in order to give people a much-needed place to eat, poop, and pop pimples. Gothamist has seen the worst of the worst, but a recent mysterious substance on the G train has kept us up at night all week wondering whether the balance between the light and dark has precipitously tipped over for the worse. "No one was around but it was definitely pee. Whether it was human or animal...we weren't sure. I've seen it all," said Kris K., the person who took the photo below on the G train Thursday evening.

We warn you: what you're about to see isn't a pretty sight. 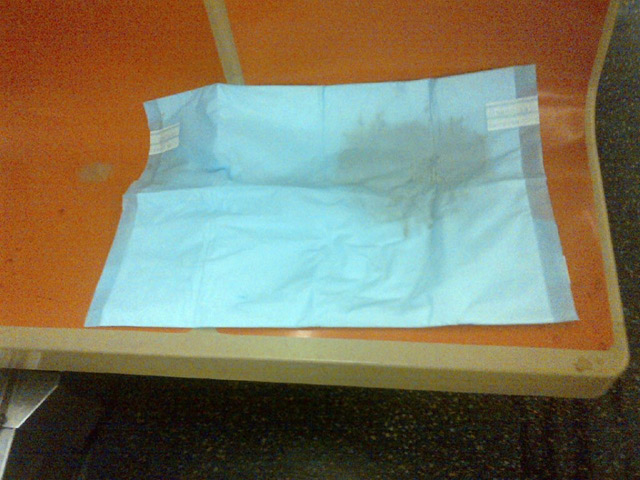 All we are left with is questions.

And a thirst for the truth.

We broke down the different possible origins of the urine, and put them in order of most to least likely:

Why put dog first and incontinent person last? Whoever left the ammonia-rich present for subway goers had the decency to lay a Wee-Wee Pad on top of it. In case you're not familiar with them, Wee-Wee Pads are god's gift to pet owners, housebreaking pads for puppies and other dogs who don't yet grasp that the entire outdoors is their bathroom. No one is just casually carrying around a Wee-Wee Pad unless they have a dog who is going to need to use one. Evidence already points overwhelmingly to a doggy being responsible.

Why dog over any human being, including those most fond of public peeing, drunk people? Because it's ON the seat. Wouldn't it be more logical for a drunk person to stand in the corner of the car (or even by the doors) and pee on the floor? Think about how carefully they would have had to aim.

Plus there doesn't appear to be enough of it to have been an adult human—unless it is a small child, but even so, that would mean the parent happened to have a Wee-Wee Pad on them at the time, which just doesn't add up. It doesn't add up, people.

But here's the thing: either way, the person who put the Wee-Wee Pad down LEFT IT THERE. And that's what's so disturbing.

Why is this bothering you so much? Because the subway is a public, communal space, and we all have to clean up after ourselves. New Yorkers are constantly teetering on the brink of outright depravity, so even the tiniest bit of thought for other people goes a long way toward maintaining the balance. Regardless of whether they were the perpetrator, the person who placed the Wee-Wee Pad down failed their moral test. It's as if they had a brain freeze halfway through: they recognized that they had the means to clean up this errant waste, they placed it down...and then they left it. One moment, they were taking democracy in their own hands and making a positive influence on society; the next, they are running with their hands over their ears, screaming "NOT MY PROBLEM."

At the end of the day, whether a dog or a child or a ghost caused this, the person who dropped off the Wee-Wee Pad failed. After all, the MTA's slogan isn't, "If you see something, place a Wee-Wee Pad down then walk away quietly."

Okay, but what if it really was a ghost? We all are responsible for our own waste, whether or not we're corporeal.

In conclusion, don't ever sit down on the G train again.

#g train
#I apologize
#labor day weekend
#overthinking
#pee
#subway
#urine
#we might be going a little stir crazy
#original
Do you know the scoop? Comment below or Send us a Tip