Next Tuesday evening at Cooper Union, some of the titans of New York City subway map design will convene alongside map aficionados to talk shop. The setting is auspicious, as back in 1978 Cooper Union hosted the Great Subway Map Debate, a showdown between backers of Massimo Vignelli's sleek-but-disorienting subway diagram and supporters, many within the Transit Authority, of John Tauranac and his Subway Map Committee's more geographically representative vision, which would soon replace it, and is the basis of the map we have today.

Vignelli died last year, taking with him the passion that prompted him to thank the 1978 debate's moderator in a letter for helping him to suppress the "homicidal urges" he felt when the other panelists were talking. Still, the upcoming talk should be lively, and a treat for subway nerds. Speakers will include Tauranac, Raleigh D'Adamo, whose work for the Transit Authority resulted in the adoption of color coding for various routes, Eddie Jabour, whose KickMap app is one of the interactive maps changing the way commuters plan trips, subway map scholar and hobby mapmaking hobbyist Joe Brennan, former MTA Open Data head Sarah Kaufman, and subway map historian Peter Lloyd.

Lloyd is the author of Vignelli Transit Maps, a book that follows the adoption, evolution, and discarding of the short-lived Vignelli diagram, through to the revived interest in his firm's work that led the MTA to commission an update for its Weekender service advisory in 2011. The book also gives designer Joan Charsyn her due, noting that she's the one who spent years actually drawing and revising the map at the firm Unimark and later Vignelli Associates, with input from fellow designers and D'Adamo, so while Vignelli's stamp is on the end product, and his design philosophy drove its creation, he was not the person actually sketching out the lines.

The book also touches on the great rivalries and societal shifts behind the city's series of subway maps over the last century, a topic Lloyd is not done with by a long shot—he is in the process of writing and self-publishing a nine-volume series on the history of the maps. We spoke with Lloyd over Skype about what to expect at the talk and why, more than 30 years after his map was scrapped, Vignelli still hated the current one. 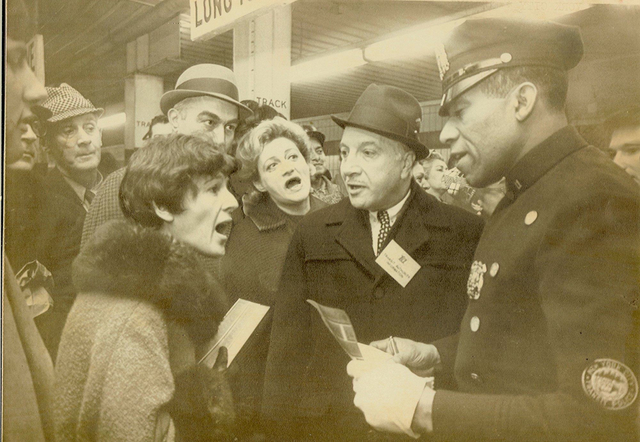 Chaos accompanied the release of a 1967 Vignelli map showing new subway lines on a color-coded diagrammatic map, a new scheme that was jarring in part because it was not accompanied by a visual overhaul of the system's cars and stations. (Courtesy Peter Lloyd)

How does it feel to be speaking at Cooper Union, the site of the Great Subway Map Debate? It's really awesome. I don't know whether you know about the history of the 1970s, but when Vignelli's map came out in 1972 it swept away a lot of the clutter. People in the MTA really hankered for going back to the didactic map—the city at the time was working on creating a geographic map.

A lot of designers were mystified that the MTA was rejecting what they regarded as a classic map designed by one of the greatest designers of all time. So they organized this debate between those [modernists] who wanted to reduce Central Park to a gray blob and those who wanted to include geographic landmarks.

It was almost a fait accompli because at that point the MTA had already commissioned John [Tauranac] to do a map, and he'd already completed it. In a way, it was a swan song for Vignelli's map.

Did Tauranac and Vignelli have a relationship after that? Did their ideas about each other change over time? Their views are diametrically opposed, and I think you'll see some of that at the talk. When it comes out, Vignelli regards the new map as a disaster, and the feeling is mutual.

Yeah, in the book you talk about how Vignelli said he felt "homicidal urges" at the debate, and how at the sight of the new map, he said, "I threw up." That gives an indication of the strength of feeling. It was a visceral feeling on both sides. John is no fan of the Weekender map.

That map was commissioned because the MTA wanted to add in information on a station-by-station basis. That's the reason they went back to a Vignelli diagram: if the 5 train isn't working on the weekend, there's no graphical way to show that on current map because there's no separation of lines. John is very keen on lexical solutions, where you write the information in text.

There was one phase of the [1940s and 1950s] Hagstrom map where they went into a lot of geographical detail, and they had these pictographic features showing little cars and buses. [KickMap app creator] Eddie Jabbour loves these details. He puts a number of pictograms on his map. John's map is a cleaner design, truer to the geography.

Were you in touch with Vignelli towards the end of his life? How did he feel about his legacy? Almost. I saw him a year before he died. Towards the end he was too ill.

I think he felt vindicated, and he felt the MTA throwing away his map in 1979 was a huge waste and a huge betrayal.

Do you think that part of the reason for the harsh reaction to Vignelli's map was that the MTA didn't realize his full vision, of a geographic city map and a neighborhood map at each station alongside the subway diagram? No. The New York subway system is the most complicated system on the planet. No map can ever fully capture that.

There were a lot of changes over those early decades, but now we have had basically the same map for nearly 36 years. Do you think we're overdue for a change? I think the change is coming anyway because of electronic maps. Eddie's KickMap has so many layers of information. You can go between night and day, and see real-time information, which you can't do with the old model, which is just a piece of paper.

And the MTA has largely handed the process of coming up with apps to developers. Right. The MTA is in the business of running trains and buses. They have a program of Open Data so that the investment of putting in the time and the energy of testing and designing an app can be taken on by developers.

How does Eddie Jabbour feel about being called a fraud by Vignelli, one of the greats? He takes it on the chin. He's very happy to have constructive criticism. He doesn't regard his map as perfect in any way.

He disagrees with Massimo on certain points. Massimo always wanted to straighten the routes. Eddie felt like there needed to be certain curves. Massimo said no you don't need to have the geographic reality of what's going on aboveground represented.

Do you think that someone with a personality like Vignelli's, a designer with a need for total control, is going to be at odds with a bureaucratic agency like the MTA no matter what? No, Massimo's view was that an essential part of good design is to have a good client. If a client sees the value of having good design, the end result would be a good design practice.

But when I come to New York I notice it. When you get off the plane at JFK, the signage in the airport is very confusing, but then once you enter the subway system, it makes sense. There is some degree of implementation problems. Often you'll see a fluorescent light positioned in front of a sign. That's not a problem with the design.

One of the biggest things happening now these kiosks with the map arrival times of various trains. The MTA is moving in that direction.

I've had trouble using those. You try to pull something up and get stuck watching an ad. The ads are a two-edged sword, because without the ads the kiosks wouldn't be there at all. The MTA doesn't pay $15,000 each for these. And if someone else is paying for them, they need to get revenue.

Generally speaking, in certain areas modernism achieved its goals, like in signage, where there's a comparatively small amount of information to convey. It runs into problems when it tries to simplify information that is very complex, and New York City's transit system is a hell of a complex system. Trying to shoehorn that into a simple, uniform design is bound to create problems.

[Creator of the 1958 diagrammatic map] George Salomon's son Richard told you that his dad didn't get that New York was a Third World place. Can you explain that? What he was getting at is that, certainly back in the '50s, the transit system is underfunded, so there's a sense of not putting enough money and resources into an essential system, a sense among people of just getting by. There were frequently line fires, enormous amounts of graffiti. People just put up with and work around it. It's an essential element of daily life in new York.

When you're standing on a platform at midnight and you don't know if the train is coming in 20 minutes or two hours it's a Third World feeling. There's still a sense among people that they're living in the past.

What is it that so intrigues you about subway maps? You've described it as a hobby, but it's a big jump from collecting maps to self-publishing a nine-volume history series. Most of my background is information design. The central problem of that is finding complex information and making it immediately clear. There are so many different systems of information that go into illustrating a transit system, and I was interested in how that can be resolved.

There's also that male, semi-autistic need to collect information. I started to collect subway maps, then when I had most of them, I was interested in filling in the gaps in my collection. Then I became interested in who designed the maps, what motivated them. It went from an idea for an article to an idea for a book to a nine-book series. I think that should be about enough to capture it.

It's great fun looking in the archives, finding some gem of information that throws light on that. Also, interviewing the guys who designed the maps. A lot of them have such a passion for that, but they've been overlooked by history. Millions of people look at these maps every day, but few people think about who created them, the thought that went into them.

#history
#joan charsyn
#john tauranac
#kickmap
#massimo vignelli
#MTA
#subway map committee
#subway maps
#longform
#original
Do you know the scoop? Comment below or Send us a Tip
A new Gothamist is coming! We’ve moved comments over to our beta site. Click here to join the conversation and get a preview of our new website.