We never thought we'd have to write this for a first time, or a second time, nevermind a third time—because isn't it common sense that you should not hug a pole on a crowded subway? Can't the NYPD crack down on these people? But last night it happened to us (don't worry, we survived)—below is our story. For accuracy's sake, we will be referring to ourselves as "Our Hero."

Last night around 6:30 p.m. we boarded a fairly crowded F train at Broadway/Lafayette—there were no seats, and there were people at all of the poles and against the doors, so Our Hero went to grab the pole that you see this young woman making love to. She didn't move an inch as she saw Our Hero searching for a place to grab the pole, and didn't flinch as our hand squeezed into a spot where her head and shoulder left a gap. Luckily, someone departed the subway leaving an empty seat, which allowed Our Hero to surreptitiously snap this photo of the offender, even though Our Hero usually feels really weird about doing that. Okay, we have reached the end of the story. And now, the lesson... 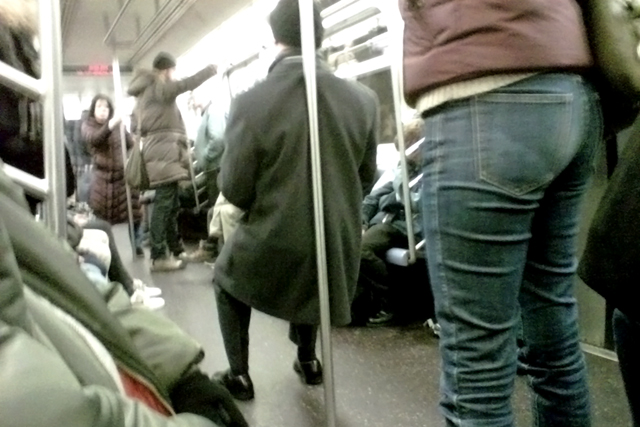 #etiquette
#hugging the pole
#subway
#subway etiquette
#subway hogging
#subway hugging
Do you know the scoop? Comment below or Send us a Tip