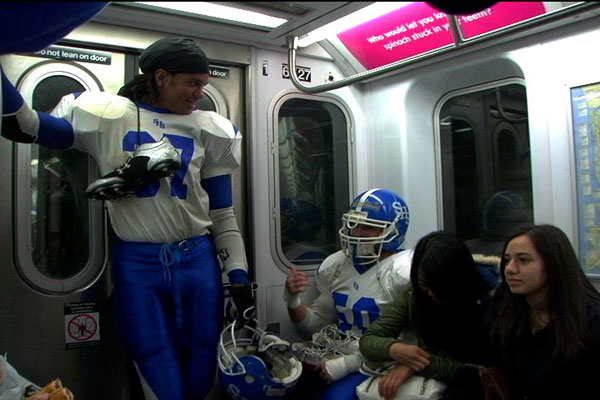 Stuyvesant High School is known for many things - high SAT scores, award winning students, and admission to elite universities. Football is certainly not of of those things. A new documentary, The Peglegs of Stuyvesant High, airing tonight at 6:30 pm on CSTV, focuses on the 2006 Stuyvesant Peglegs (named after Peter Stuyvesant, who had a wooden leg). Coming off a winless 2005 season, new coach Brian Sacks tries to lead his team to its first winning season in years, but is up against parents that would prefer that their students join the chess team and some players that have never played football before.

The team, which is one of two from Manhattan high schools, practiced at Pier 40 and played "home games" at Brooklyn Tech. In addition to interviews with the student-athletes, the documentarians talks to parents, some of which are recent immigrants to the United States.

The film is a nice look into a high school football program that differs vastly from most others around the nation. It's a team that hears taunts like "nerds" and "go do your homework," something we guess most football players never hear from opposing fans.

Assuming you have something better to do tonight (say, Yankees-Indians game), The Peglegs of Stuyvesant High will be rebroadcast again at 10 pm tonight, 9 pm Tuesday, October 9, and 10:30 on Friday, October 12.