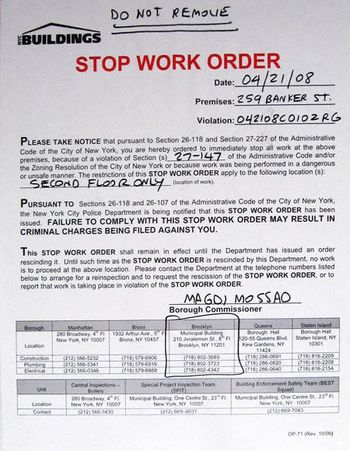 Two years ago Studio B promised/threatened to bring Miami to Greenpoint, and for better or worse, the venue/club/bar has delivered ever since. Currently they're raising the bar by creating a palm tree adorned rooftop oasis -- and the neighbors are just thrilled.

Last week we asked how long it would take before the local complaints shut down the roof. Today Miss Heather points to the stop work orders the club has received, still during the construction phase, as recent as April 21st.

They were cited for erecting a 2nd floor (read: roof) bar without a permit, but according to the photo that "leaked" last week, that little piece of paper isn't going to stop them from debuting their rooftop with a blowout extravaganza on May 2nd! How many people will be there? Probably about double their capacity, something they've been busted for before. As of now, their capacity appears to be undergoing renovations along with the club's physical ones.

Studio B better beware, the close-by Sound Fix recently had a run in with the Dept. of Health that shut them down temporarily -- something that took root in neighbor noise complaints.