Elevator Repair Service, the ingenious theater company that created GATZ, the stunning word-for-word seven hour adaptation of The Great Gatsby, is back with more verbatim virtuosity. This time their source material is the oral argument from the 1991 Supreme Court case Barnes v. Glen Theatre, in which a group of exotic dancers, citing the First Amendment, challenged an Indiana ban on public nudity. Clocking in at a brisk 75 minutes, you could squeeze a performance of Arguendo into GATZ's dinner break. It may not be epic, but their latest lively romp finds Elevator Repair Service at their playfully unpredictable best.

Starring just four of the troupe's core members plus the welcome addition of Radiohole's Maggie Hoffman, Arguendo (literally: "for the sake of argument") begins with publicity-seeking exotic dancer Rebecca Jackson (portrayed by Hoffman sporting hilarious '90s big hair and shoulder pads) bantering with reporters outside the Supreme Court. Like many strippers, Jackson insists that strip clubs are not the dens of iniquity that they appear, and that most of her colleagues are happily married entertainers, not prostitutes. But the crux of the state's case is not that exotic dancing promotes prostitution, but that strip clubs are essentially public places that must conform to decency laws. 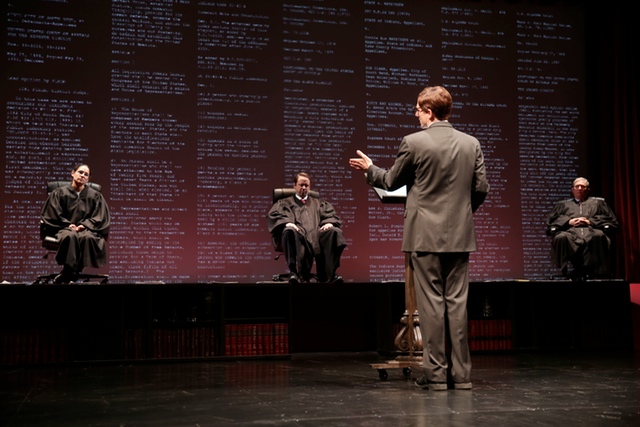 If a 75 minute word-for-word reenactment of a court case doesn't make you giddy with anticipation, then you're probably not familiar with Elevator Repair Service. While the case itself is interesting enough on its merits, what makes Arguendo so much fun is the way director John Collins and company use the transcript as a springboard into daffy, highly physical comedy.

It's as if they've taken a stack of half-remembered historical documents and shredded them into brightly-colored confetti, to be shot from a cannon with a burst of goofy joy. There is carefully-choreographed chair dancing, rapid-fire costume changes, and one hell of a hilarious strip tease. First, veteran ERS performer Mike Iveson strips down from his '80s lawyer's suit to just a gold thong and black socks—then he goes Full Monty and stays that way, standing at a lectern and arguing the points of the case with utter gravitas and full frontal. He deserves an OBIE for comedy and courage.

Yet for all its irresistible silliness, Arguendo never feels shallow—the source material isn't tampered with, and the arguments provide an intellectually compelling foundation for the shenanigans. And to help follow along, the back wall of the theater is covered with dynamic animated text projections by visual artist Ben Rubin, who turned the transcript of the oral arguments into kinetic art.

At this point I have no doubt that Elevator Repair Service could rip pages out of the phone book and somehow turn it into highly engaging theater. Barnes v. Glen Theatre is a lot more interesting than the Yellow Pages, and the outsized personalities of the Supreme Court judges give the company plenty to work with. After all the dust settles, we're left with a surprisingly sweet soliloquy from the inimitable Susie Sokol, who, as Sandra Day O'Connor, recalls how she embellished her robe after Chief Justice Rehnquist, inspired by a Gilbert & Sullivan operetta, added yellow stripes to the arms of his. It's another absurd dash of history in a uniquely absurd creation.

Arguendo has been extended through October 27th at The Public Theater.