Lebowski Fest, the tribute to all things Big Lebowski, will be returning to New York City for the first time in three years next week. Beyond a chance for the film's superfans ("Achievers," in the parlance of the festival) to drink White Russians, bowl and watch the Coen brothers' shaggy dog comedy together, the return of the festival also marks a redemption of sorts for festival co-founder Will Russell, who's been in recovery from a manic episode that took over his life for a period of 2015.

Russell was diagnosed with bipolar disorder 20 years ago, but told Gothamist that he managed it with medication and sobriety up until his nearly disastrous 2015 episode, from which he has now recovered. He isn't taking his second chance for granted; in addition to bringing The Dude's abiding message to the city, Russell also told us that this year's festival is devoted to spreading awareness about mental health issues.

"I want to help get the conversation out there, and let people feel comfortable talking about something they might not feel comfortable talking about or understand," Russell said. "I see a silver lining in my story—that I can use the story to hopefully help other people with mental illness, to convey the message that your life is not over, you can still live a decent life."

Russell's very public tailspin included "multiple arrests, bankruptcy and the loss of two businesses." The months-long episode was, in his words, "just a nightmare" that wrecked his relationships and finances, and ended 20 years of sobriety.

During all of this, Russell says he became obsessed with "this other enormously risky project where I was trying to buy an old roadside attraction I wanted to turn into an amusement park. It was just an insane idea, but it seemed feasible to me." It wasn't, and meanwhile, the Lebowski Fest itself almost fell apart. "I wasn't managing and handling the festival very well, I wasn't giving it the attention I had for the past 15 years," Russell told us.

Russell credits his partner in the festival, Tyler Gill, with helping getting things back on track. When Gill at one point told Russell he couldn't deal with his erratic behavior any more and quit, "all of our online merch orders started piling up and no one was shipping them out for a couple of months," Russell said. Eventually, coming out of the episode, Russell was able to get Gill to come back because "he knew the person I was during that manic episode wasn't who I am." Working together, they were able to save the festival from ruin.

"I was so depressed, I wasn't even capable of helping out," Russell recalls. "And he single-handedly kept it going for long enough so I could come back and keep the fest going." 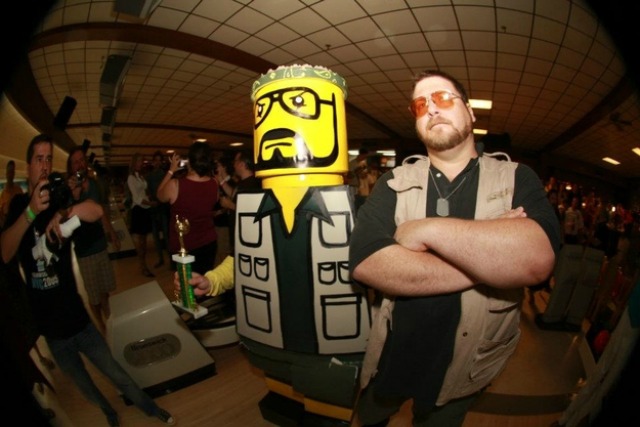 3,000 blocks beautifully fit together, you're goddamn right I'm living in the past. (Photo by Greg Andrews)

According to Russell, The Big Lebowski itself contains small bits of philosophy that were able to help him as he recovered and put the pieces of his life back together. "Tyler, when everything was so out of sorts, he would tell me 'Nothing is fucked here dude, nothing is fucked,' when I was convinced it was falling apart. He would tell me 'You're being very un-Dude.' And I didn't believe him at the time, but he was right."

As for this year's festival, the fourth since Russell's episode, New York attendees will have a couple of unique experiences to check out. The movie itself will be shown outdoors on August 3rd, at Lincoln Center, as part of their Lincoln Center Out Of Doors series. Like a silent disco, attendees of the "silent screening" will be able to watch the movie with a pair of headphones on, that Russell says will have two audio channels. One will be the movie's normal audio, and the other will be the movie audio along with audience response.

Russell also said that he's holding out hope that "one of the bigger actors who's in New York might show up and say hi before the movie." That puts John Turturro and maybe even Steve Buscemi into the possibility column.

At the bowling party the next night at Lucky Strike, Achievers will be treated to a Jesus-themed performance by burlesque dancer Corevette LeFace, in addition to the usual unlimited bowling, costume contest and trivia.

And per Russell's interest in being a mental health advocate, the bowling party will also benefit the National Alliance for Mental Health in their efforts to de-stigmatize mental illness. Russell said that in giving him something to do and keeping his mind off his depression, the Lebowski Fest "played a part in my recovery. That's why I think it's important that I try to give back in some way to the mental health community."

"For anybody out there struggling with mental health issues, and there are a lot of us out there, whether it's anxiety or depression or more severe things like bipolar or schizophrenia. I would say, don't give up. Even if you want to give up, don't give up."

#lebowski fest
#mental health
#will russell
#original
Do you know the scoop? Comment below or Send us a Tip