Stretch Out On This Hidden Bench In Long Island City

Tucked behind a clump of bushes near the corner of Jackson and 45th Avenues in Long Island City—and across the street from MoMA PS1—Bushwick-based artist Fanny Allié's latest installation is welcome addition to a stretch of blocks that, until this month, didn't have anywhere comfortable to sit.

A Bench for the Night is part of the Parks Department's Art in the Parks program, and will stand in Long Island City until mid November. It's a continuation of Allié's previous work on the themes of homelessness, and the human form. In 2013, Allié displayed a life-size steel silhouette of a friend of hers, a formerly homeless man, in Tompkins Square Park—one of his favorite spots. 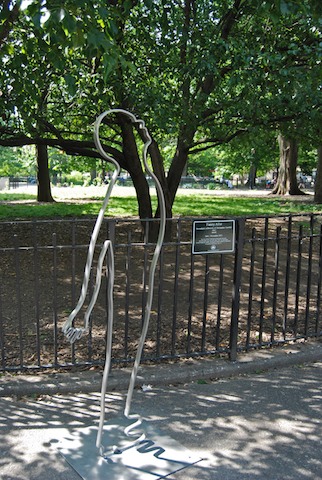 And in 2011, she designed The Glowing Homeless, a neon, human silhouette reclining on a park bench, for Bring to Light NYC, a public art event in Greenpoint. By putting glowing neon on a park bench, she wrote at the time, "I reversed the normal reaction of avoidance [of a homeless person], and drew people towards the form on the bench." 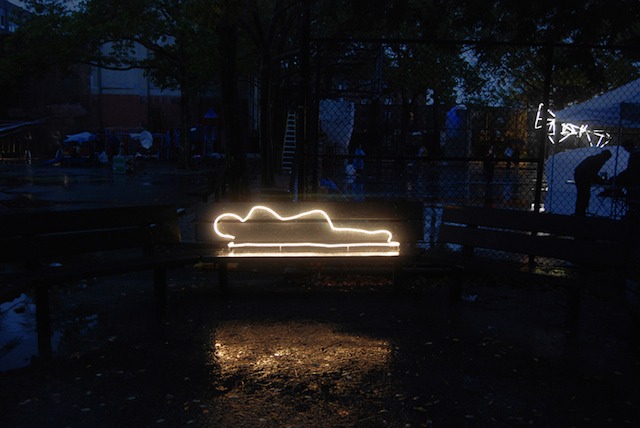 But you can't lean back, much less lie down, on a bench covered in neon tubing. Allié points out that it's hard to find a bench in New York City that is continuous—that doesn't have a dividing armrest down the middle. "The bench is meant to be used and laid on," Allié told us. "Of course I didn't put any dividers."

So when you're inevitably dehydrated and seeing double at Warm Up, maybe you'll think of this shady spot. The bench "wasn't meant to be hidden, but it is a little bit," Allie told us. "I think you really have to look around to see it. I like that."

#bench
#Fanny Allie
#homelessness
#long island city
#original
Do you know the scoop? Comment below or Send us a Tip