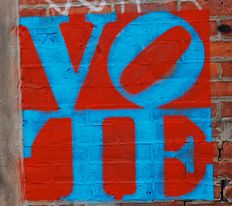 Street artist Clark Clark (fake name alert) has been urging New Yorkers to vote through his "VOTE" graffiti campaign. The design mimics that of Robert Indiana's famous LOVE sculpture circa the 1970s. The 25-year-old Clark told The Villager:

“I’ve hit four boroughs now,” Clark said, sitting in his Flatbush, Brooklyn, apartment, surrounded by his own work. “I still want to do Staten Island. I had wanted to go and do all of Vito Fossella’s walls, but he did the right thing and stepped down.”

He also notes that it's an homage to artist Indiana, not a parody -- and hopes to connect with the younger, urban voters by appealing to them through his nonpartisan campaign. He told the paper, however, that he thinks "the people who will respond to graffiti, demographics show, will probably vote for Obama over McCain."

Clark says he's done about 2,200 and 2,500 stencils since January, and has also given city folk some stencils and stickers of their own. Sound familar? Like Shepard Fairey, he's also been busted a few times, being written up four times in New York already, and spending one night in The Tombs. When he tried to hit up the swing states, however, he received even more severe punishment -- including a full four days in prison in Ohio.