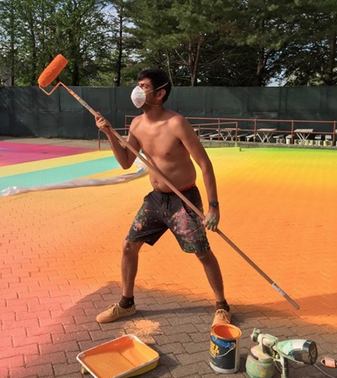 Minneapolis-based street artist Hot Tea (aka Hottea, given name Eric Rieger) just took a break from his signature medium (that would be brightly-colored yarn) to transform the Manhattan Park Pool on Roosevelt Island into a painted neon grid so bright it looks like it has its own internal light source.

"It was a dream project, because clients never let me use as much color as I want to," Rieger told us yesterday. Which is, apparently, a whole freaking lot.

The paint job, entitled "Asylum," was commissioned by design firm K & Co., and will glow all summer for pool visitors, accented with hammocks and neon floaties, until it closes for demolition and renovation this fall (K & Co. is going to be redoing the entire Manhattan Park facility, starting this summer. Not just the pool, but the park's four lobbies, and all of the residential units, as well.)

Rieger tells us that he took inspiration for the pool deck from his own color field installations, while the triangles and diamonds painted on the bottom of the pool are meant to look three dimensional, like the type-based yarn work he's been known to install on buildings and fences.

A project this saturated takes a long time, and calls for a lot of paint. "I initially started with 30 gallons, but the concrete soaked up the paint so much that I had to go back to the store," Reiger said. "I went back for 20 more, and had to go back again and get 80 more. That's 130 gallons, just for the pool deck. The pool itself took 15." Epoxy paint is thick and sticky, and dries in 45 minutes, so Reiger had to work quickly to get even coats.

The job got done in a week in a half, thanks to five helpers. Reiger says that he worked from 8:00 a.m. to 3:00 a.m. every single day. "I'm not the strongest person," he admitted. "Mentally I was like, I don't know if I can do this. Then I was like no, I have to prove to myself that I can do this."

He added, "I felt that by the end of it, I was going to go completely crazy. I'm never doing anything so physically and mentally demanding again."