"Thanksgiving masquerading has never been more universal. Fantastically garbed youngsters and their elders were on every corner of the city. Not a few of the maskers and mummers wore disguises that were recognized as typifying a well-known character or myth. There were Fausts, Uncle Sams, Harlequins, bandits, sailors. All had a great time. The good-humored crowd abroad was generous with pennies and nickels, and the candy stores did a land-office business." This is a report from an 1899 edition of the NY Times, describing a Thanksgiving that sounds more like Halloween. We've looked back at the strange "Ragamuffin Days" of early 1900s NYC a few times before, but the surreal times are worth another revisit.

Despite the Grey Lady's report, the Bowery Boys point out that, in general, "it's difficult to find too much enthusiasm for this unsavory tradition in newspapers of the day. Editors preferred to focus on family gatherings, recipes and table placements, not only out of social convention but on the behest of advertisers, who made more money selling turkey and china than cheap masks." Regardless, during this era the LA Times claimed that Thanksgiving was "the busiest time of the year for the manufacturers of and dealers in masks."

This now long-forgotten custom wasn't NYC-centric—it happened in Los Angeles, Chicago, and other U.S. cities—but it was certainly prominent here. "This play of masking is deeply rooted in the New York child. All toy shops carry a line of hideous and terrifying false faces or 'dough faces' as they are termed on the East Side," a 1909 issue of Appleton's Magazine reported.

How did the odd take on Thanksgiving come about? In 1909, the Times reported that the origin was "dubious," and claimed that no New York historian had ever thought it worth retracing. They reported on the current state of Thanksgiving Masking as well—"Brooklyn clergyman, preaching to children on Sunday, made some extraordinary misstatements about the custom among ill-bred children, now tolerated by the police and encouraged by the undiscriminating citizen, of disguising themselves in cast-off clothing on Thanksgiving Day and begging for pennies in the streets." It was then declared "an abominable custom, amounting to a public nuisance... it is unmistakably a survival of an ancient if grotesque ceremony whose meaning has been forgotten."

NYPL historian Carmen Nigro recently told NPR that the "parades of ragamuffins—sometimes called 'fantastics' because of the costumes—can be dated at least to 1891." On the library's blog, she wrote, "The last mention of the Thanksgiving Ragamuffin parades—as one had appeared in the Bronx as well—is in 1956." Though it seems the phase out started around the time of the Thanksgiving Day parade's debut in the 1920s (below, a mask provided by the Buffalo Junior Courier Magazine in 1925). 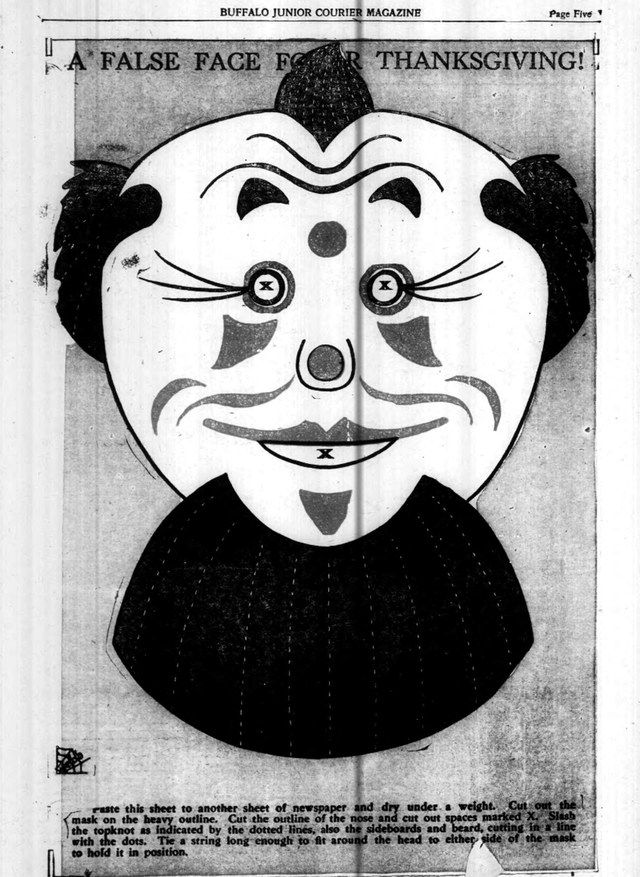