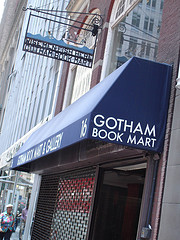 In May word was spreading that the famed Gotham Book Mart would be shutting its doors as the owner, Andreas Brown, was forced to pay overdue rent. At that time, the entire contents of the shop ("from rare first-edition John Updike novels to the worn-out oriental rug on the third floor") were sold for $400K at a court-mandated auction. The Post called it an "undignified last chapter for the institution - beloved by the likes of Edward Gorey, J.D. Salinger and Jackie Kennedy Onassis."

An "obituary" in the Times Business section referred to the shop by the wrong name, and simply read: "Tremendous Inventory Books, Furniture, & Memorabilia Of The World Famous Literary Landmark Gotham Book Store." The auction itself was rushed and ugly. Fred Bass, owner of the Strand Bookstore, told the Voice: "It was ridiculous. There was no way for me to come up with valid prices. . . . Bang, bang, bang, let's get it over with."

So what got the famous book peddler to that point? For starters, the 2004 move of the store put the establishment under a fancy townhouse roof on East 46th Street, in the heart of...nothing, really. The area was a shopping dead zone, driving sales down. On top of that, money probably wasn't managed very well, and boxes filled with valuable books went unpacked and unsold. A former Gotham Book Mart employee told the Voice that a lot of valuable material wasn't made available for purchase ("a hundred copies of Transition magazine, mint condition, Eugene Jolas's avant-garde publication from the '30s, where Finnegans Wake first appeared"). They weren't even listed for sale on a website, which was an idea they had that never came to be.

Today an article in the Village Voice asks if their death was a ruse, and their funeral inspired by the likes of Tom Sawyer.

"Something's cooking," said one former employee, reached by phone last week, while another central source spoke optimistically of "important things happening"—implying the possibility of a settlement that would resurrect the store and erase its ugly end.

So what's keeping hope alive that the shop may reopen? In the past it has received generous loans from the likes of Truman Capote and Joanne Carson (Johnny's second wife), but there's no word of something like that happening again, only that the lawyers are "still talking to each other."