Meet Heather D., a resident of Brooklyn who had a stock photo she posed for five years ago come back to haunt her this week. She explained in a series of Tweets: "Ultimate nightmare: in 2007 Julio and I got paid to do some cheesy stock photoshoot for Getty. They dressed us up in horrible clothes and now the photo is in the NY Post as the face of (disgusting) modern day hipsters. MORTIFIED! So the moral of the story is don't pose for stock photos or else 5 years later you could find yourself destroying entire neighborhoods according to the New York Post." The article ran on Sunday, and is titled "Attack of the hipsters: How they ‘ruined’ Williamsburg," making Heather D. the face of a much-maligned generation of gentrifiers. We talked to her about it.

When did you do the shoot—what was the experience like? We did it in 2007—someone on the street in SoHo offered my boyfriend Julio $125 an hour to do some stock photos for Getty Images. He asked if I could do it too (we we trying to save money for a big trip to Europe that fall) and they said yes sight unseen. When we got to the shoot a couple of weeks later all of the clothes they had set aside for me were like size 0 and since I'm not a model and have the body of a real-life woman there was some initial awkwardness while we figured out what part of the wardrobe I could actually wear, hence the weird ill-fitting clothing they have me sporting. It was so cheesy. We weren't supposed to take the tags off the clothes, which felt sort of unofficial, but they also had a make-up artist and craft service, which made it feel pretty fancy. 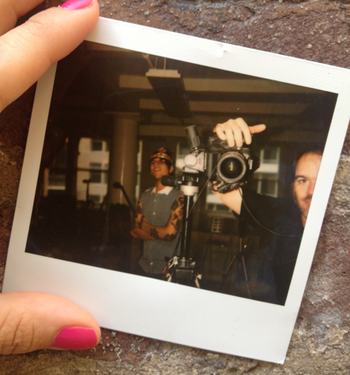 Photo by Heather D
What was the photographer telling you as far as motivation? You look pretty happy with yourself in this photo, as if you just infiltrated and successfully took over a hot new Brooklyn neighborhood.

At first they had us posing under a black light and we were supposed to look scary or mean or something but that didn't work out at all so it quickly moved to more of a "cute" look. There are a lot of shots they did where Julio is wearing some weird plastic crown and I remember them saying something to him about acting like a king. I've been a photographer for almost 20 years and am incredibly uncomfortable on the opposite end of the lens (I just kept telling myself "Europe! Europe! Europe!") and I think that showed so at one point they handed me a polaroid and let me "hide" behind it in some of the shots. I was flushed and laughing the whole time - sort of one of those "this situation is so incredibly strange and out-of-character for me, all I can do is laugh about it and hope it's over soon" moments. There was a room of people just sitting there staring at us and handing us balloons and weird props and trying to direct us what to do with them.

Now that you and fellow hipsters have ruined Williamsburg, where do you plan on attacking next? We moved to Park Slope in 2007 and have been working really hard on ruining it here. I feel like we've almost got it wrapped up, so we're hoping to move on to Carroll Gardens this fall. We have so much more awesome ruining to do, I can't wait to get started (or rather, continue). We were going to work on ruining some good beaches this summer but I think we were a little late on Ft Tilden and The Rockaways so I bought a car and we decided to head further up Long Island to Robert Moses/Fire Island where we've been slowly infiltrating all summer. Hang on to your Cannolis, South Brooklyn, cause we're moving your way fast!

Any thoughts on the article itself? I think an article about hipsters moving to Williamsburg is probably about 5-10 years too late, but that seems just about on par with everything else in The New York Post so I guess it makes sense. I think it's hilarious they used that old photo of us (where we look more like clowns than hipsters), but I assume it was one of the cheaper ones available on Getty, so again right on par.

So if you didn't learn from Joey Tribbiani, maybe you'll learn from Heather D.'s tale. On the upside, they did get to go to Europe... though they failed to gentrify the Reichstag. 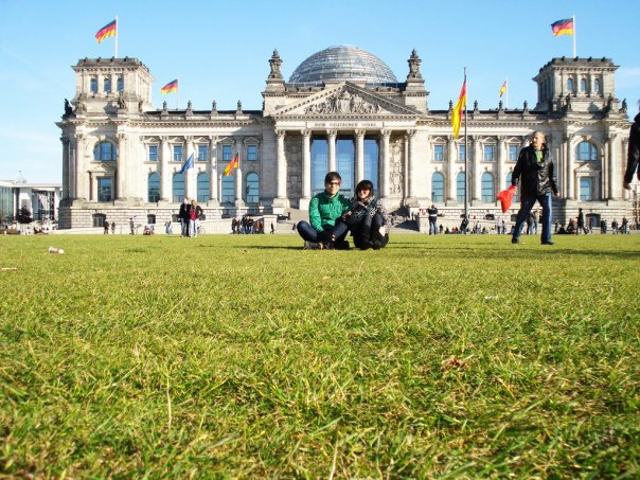