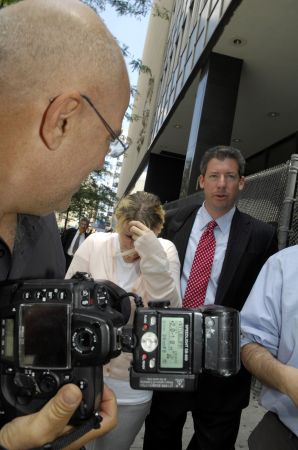 Last week Steven Hirsch got some NY Times attention for his blog, Courthouse Confessions. Perching himself outside of the Manhattan Criminal Court while working as a court photographer for the NY Post, he asks everyday defendants, upon their departure, what got them there. The stories are culled together for his Confessions project, giving a broad snapshot of just who is going in and out of the building each day while the press waits for the A-list names to show their face.

When and why did you start the Courthouse Confessions project/website? I started it at the beginning of June. I think the third. I work as a freelancer for the Post as the court photographer. I photograph the perps du jour at the local courts. Robert Chambers, Remy Smith and Tatum O'Neal come to mind as some recent A-listers. While I stand outside waiting, I get the daily request to, "Hey take my picture!" or "Do you want to hear a good story?" Well that's a no brainer, let me put them both together and I wound up with my latest project. This is part of a trilogy of crime. The other two are "Love Thy Neighbor", Homes of New York State Registered Sex Offenders and "Evidence" From the Trial Of Peter Braunstein.

Do you tell people what the photos/questions are for? Yes I tell them it's for a blog, book or gallery show. I tell them to Google "Courthouse Confessions" so they can find it. I'm having a show next year at Pratt Institute. I might show the whole project.

Have you found most people are willing to discuss their case with you? Maybe one third of the people I ask will let me photograph and do an interview. I turn down a lot of people willing to do it. The story needs to grab you.

Have there been any happy endings in the stories? Yes, Julio Brockington aka Misdemeanor Man. He said, "I hope this is the last one. I wanna retire. I wish I could go back to the number that comes before one, which is zero, because it wasn't . I'm not proud of it, but what it is is what it is!" Sweet man actually. Hey It's never too late to be hopeful.

What is the most interesting story you've heard since beginning the project? Janet Braha. Whose name fits her crime. Or is it the other way around?

Have you gotten any response from the court system about the site? No Comment.

Please share your strangest "only in New York" story. Hey I work for the Post so everything strange is normal for me.

Which New Yorker do you most admire? Willie Sutton. Born in Brooklyn like myself he might of been New York's great criminals. He would have made a great confession.

Given the opportunity, how would you change New York? I lifted this from today's MiamiHerald.com. "The price of a one-day adult ticket at Disney World, the company's largest resort, rose $4, or 5.6 percent, to $75, and children's tickets rose 5 percent to $63, according to rates posted on Disney's website. The company has also raised prices for certain amenities, such as a 50 percent increase for strollers. Disney parks spokeswoman Lisa Haines said in an e-mailed statement the price change reflects the entertainment value the company provides to customers. The price of a five-day pass that grants unlimited access to all parks at Disney World rose 4.6 percent to $272 for adults and 5.8 percent to $237 for children."

Now as far as I'm concerned I think Manhattan is much more entertaining then Disney World. I've been there. It's not even close. So if they can charge that kind of money, we should do the same at the bridges, tunnels and airports. Then spend the money on public transportation, parks and public toilets for all of the defendants listed on my blog that get arrested for urinating in the streets.

Under what circumstance have you thought about leaving New York? When hell freezes over.

Do you have a favorite New York celebrity sighting or encounter? I'm tired of New York celebrities. They're too stiff and studied. The people I photograph for my blog are much more interesting and photogenic.

Favorite headlines: NY Post or Daily News? "Bad Heir Day". My photo of Anthony Marshall with his hair going straight up entering court for his arraignment. It won best NY Post cover of all time . Don't miss the "Headless Body in Topless Bar: The Best Headlines from America's Favorite Newspaper" It's fantastic. And my "Bad Heir Day" cover is in it.

Best cheap eat in the city/near the courthouse?
Nha Trang at 87 Baxter Street. You'll find me there at least 3 times a week for lunch. Great Vietnamese. The courts are on the edge of Chinatown. Try the pork chops, crispy squid, salt and pepper shrimp and great soft shell crabs in season.

#Courthouse Confessions
#interview
#Steven Hirsch
Do you know the scoop? Send us a Tip